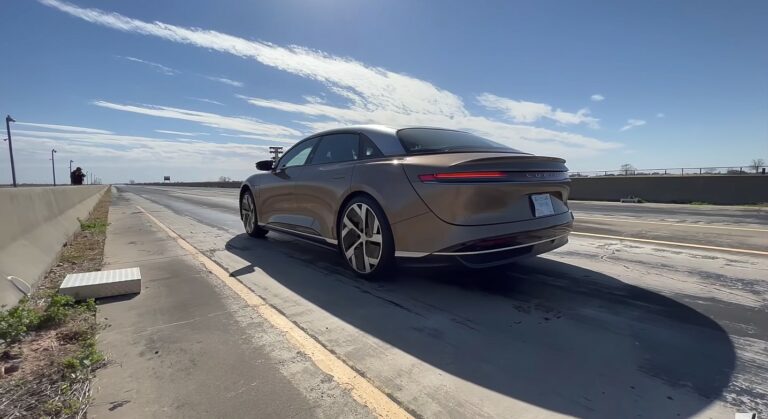 Lucid Air Dream edition performance was tested on a drag strip, showing that the vehicle can be much more than a luxury car. It performance’s 60 mph and quarter-mile performance were tested. With 1,111 horsepower the luxury car can catch up with more fastest production cars like Tesla Model S Plaid.

What’s interesting is that Lucid was able to achieve the Air Dream Edition Performance’s 1,111 horsepower with just two motors. Drag racing veteran and host of YouTube’s DragTimes channel Brooks Weisblat took the Lucid Air to test the performance. The vehicle owner was a long-time car enthusiast who also happens to own other cars like Tesla Model S Plaid and other supercars. While the owner stated the positives of the vehicle, certain features which could also be improved were also mentioned. Those are Software and audio system.

When it came to the drag strip, the Lucid Air Dream Edition Performance did not disappoint. With Launch Mode enabled, the Air attacked the quarter-mile without hesitation. Ultimately, the first test of the Lucid Air Dream Edition Performance showed that the vehicle showcased a 0-60 mph time of 2.93 seconds and a quarter-mile time of 10.21 seconds. The vehicle’s trap speed was also very impressive at 143.37 mph.

With such results, the Lucid Air Dream Edition seems very close to the Porsche Taycan Turbo S’ quarter-mile time, which stands at 10.48 seconds. The Lucid Air Dream Edition Performance’s trap speed is significantly quicker than the Taycan Turbo S,’ however, as the luxury sedan had a trap speed of 143.37 mph while the all-electric Porsche finished the quarter-mile in 131.8 mph, as per MotorTrend‘s tests.

Interestingly enough, the Lucid Air Dream Edition Performance showed slightly better 0-60 mph and quarter-mile times as it was tested further. In its third test, for example, the all-electric luxury sedan’s 0-60 mph dropped to 2.88 seconds, which is closer to the 2.5 seconds estimated by Lucid. Its quarter-mile time also improved to 10.04 seconds. Its trap speed took a dip, however, as the vehicle completed the quarter-mile while traveling at 142.59 mph.

The test details highlighted by InsideEVs are as below,

For the next episode, it is expected that the Lucid Dream Air edition and Tesla Model S Plaid will be on the race. While Lucid is considered a potential vehicle to break the record, an actual race sounds interesting.