It’s been 81 years since Marvel Comics first appeared on August 31, 1939, and people saw a world of superheroes for the first time. During Marvel Month, special edition Captain America non-fungible tokens (NFT) will be released in honor of Marvel’s birthday and cooperation with Veve Digital Collectibles. 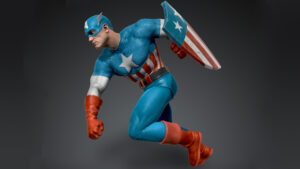 Marvel Entertainment, a wholly-owned subsidiary of The Walt Disney Company, announced at the end of June that the company will venture into the world of non-fungible tokens (NFTs). Marvel announced “Marvel Month” during the first week of August, along with the release of Spider-Man NFTs.

As part of Marvel Month, the month-long event culminates with Captain America on August 31. Cap’s debut comic was published in 1941, so the NFT drop will honor the 80th anniversary of his debut. Captain America’s NFT launch will begin at 8 a.m. Tuesday on the Veve app. (PT). Marvel’s iconic first Avenger NFTs will include:

The Amazing Spider-Man #1 will also be released on Tuesday at 11 a.m. EDT as a “fully-readable digital comic.” (PT). This is one of the most renowned comic books on the planet, and one of the most valuable. The same comic book has had a three-fold increase in value during the last decade, and an NM+ 9.6 copy of the first Spider-Man comic took in over $300,000.

It uses the Veve Digital Collectibles platform and Orbis Blockchain Technologies Limited to power the Marvel NFTs. Users of the Veve app can search for and trade NFT collectibles via their iOS or Android smartphones. Veve’s competing applications include such firms as Wax.io, an NFT platform that has partnered with companies such as Atari, Topps, Funko, Capcom, Street Fighter, Bratz, Robotech, and more.

What are your thoughts on Marvel’s NFT release on the Veve app? In the comments section below, let us know what you think about this topic.