Hard Rock International is set to acquire the operations of the Mirage. That is subject to regulatory approvals and other customary closing conditions, according to a Monday news release. Hard Rock said it plans to build a guitar-shaped hotel on the Las Vegas Strip. 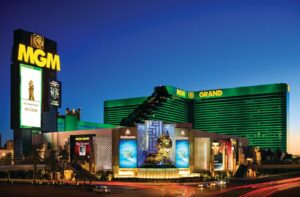 “As part of the team that opened The Mirage in 1989, I know firsthand how special it is, and what a great opportunity it presents to the Hard Rock team,” said MGM Resorts CEO and President Bill Hornbuckle in a media release. “I want to thank all of our Mirage employees who have consistently delivered world-class gaming and entertainment experiences to our guests for more than three decades.”

The Mirage opened in 1989 and was acquired by MGM Resorts in 2000. The property is known for its entertainment options and 90-foot Strip-side volcano.

The sale is expected to close in the second half of 2022. It is likely to deliver to MGM Resorts net cash proceeds of about $815 million after taxes and fees.

The company will retain the Mirage name and brand, licensing them to Hard Rock royalty-free for up to three years while it finalizes its plans to re-brand the property.

In what MGM Resorts International CEO and President Bill Hornbuckle called “a significant milestone for MGM Resorts and for Las Vegas,” the companies announced MGM Resorts will sell operations of The Mirage to Hard Rock International in a cash deal worth almost $1.1 billion.

It wasn’t immediately clear if the iconic Mirage volcano fountain will remain at the property that former casino mogul Steve Wynn opened with a Polynesian theme in November 1989. MGM Resorts acquired the 3,000-room resort in 2000.

The underlying Mirage real estate is now owned by MGM Growth Properties. Which is being bought by New York-based VICI Properties in a $17.2 billion deal expected to close next year.

Allen said Hard Rock International will welcome The Mirage’s 3,500 employees to its roster.

He noted that his company had no previous involvement with the former Hard Rock Hotel & Casino that operated from 1995 to 2020 east of the Las Vegas Strip. That property was purchased in 2018 and renovated. It was rebranded by Virgin Hotels Las Vegas with a gambling floor operated by Mohegan Sun Casino.

Hard Rock International bought the naming rights in May 2020 with plans to eventually open a Las Vegas Strip property.

Under the terms of the agreement, MGM Resorts will keep The Mirage’s name and brand. The licensing it to Hard Rock is royalty-free for up to three years. While it finalizes its plans to rebrand the property.

The transaction is expected to close in the second half of 2022, following regulatory approvals.