NASA’s ingenuity helicopter has sent us the first color photograph of Mars from its camera. This is a normal low-resolution image but is quite an achievement considering the fact the helicopter was able to survive at Mars. It was snapped on 3rd April and sent to the Earth. The helicopter is still under the perseverance rover whose wheels can be easily seen in the image. It is confirmed that once the helicopter does fly, it will send better-resolution images to Earth.

NASA’s comments on the helicopter

The organization shares that the helicopter was able to survive on the planet as a stand-alone system. They also said that it survived a 10 cms drop to the surface and is now standing upright on its legs. Very soon, the helicopter will take off and will be the first vehicle to fly on a different planet. You must be wondering why surviving the first night on the planet is such a big deal. This is because the temperature there is -90 degrees Celsius. 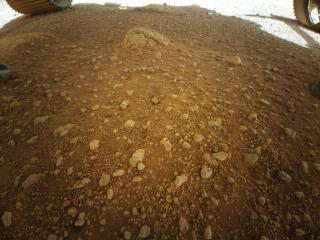 At this kind of extreme temperatures, electronics can be damaged, and this could have rendered the helicopter useless. In order to battle such temperatures, the helicopter has to power its heater from its battery that is charged by the solar panels attached to it. The helicopter’s survival confirms that they have managed to put in the right heater, battery, and insulation to help it battle the cold temperatures there. The project manager of Ingenuity said that this is a big win for the team.

Plans with the helicopter

For a few more days, the helicopter rotorcraft will be monitored, and its working will be examined to have a proper idea of how it’s doing. After that, it will be released free in the atmosphere, where it takes its first flight. NASA will also take a look at the navigation system of the helicopter and check if it’s doing well. The test flight of the helicopter will be a big achievement for NASA. Do note that it is completely for technical purposes and doesn’t have any science equipment apart from the cameras.

What are your thoughts on the first photo sent by NASA’s helicopter? Let us know in the comments below. Also, if you found our content informative, do like it and share it with your friends.

Also Read: The Crypto Council for Innovation is here to push for better regulation.