Niantic is building a reality game to collect Bitcoins

You’ve probably heard of Niantic. Yes, this is the same company that created the Pokemon Go mobile game, which was a great hit in 2016.

Bitcoins will be collected through a reality game by Niantic 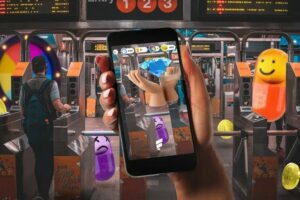 Niantic has come up with a fresh concept. The business collaborated with Fold to create the game Fold AR. The user will be able to collect Bitcoin using it, as reported by The Verge. It is currently available in a limited beta version, with a stable release scheduled for 2022. Currently, the Fold app is only available in the United States.

When players use their debit cards to make purchases on the Fold platform, they can earn Bitcoin. This element is expanded in the new game, which allows players to run the game and uncover bitcoin and other prizes buried around them.

Every 10 minutes, a new bonus block appears in the player’s territory. The user can receive satoshis, a small unit of bitcoin, as well as other in-app benefits when they claim a block. If the user is unlucky, he or she may lose their Bitcoin winnings — for example, if they come upon a “poisonous pill.”

A Fold card is not required to play the game, but holders of these cards receive additional grants and prizes. Customers will be able to swap Bitcoin after the game is fully available.

According to Fold CEO Will Reeves, anyone may use the Fold app, which he describes as the “easiest, most entertaining method to earn your first piece of Bitcoin.” “It’s always been crucial to us to make it easy for everyone, regardless of degree or technical expertise, to participate in the Bitcoin economy,” Reeves said.

Niantic indicated earlier this year that they would reverse some of the COVID-19 adjustments and return the game to its original state. With pandemic fears still lurking over most countries, this choice was met with a lot of opposition from players who felt it was too early to go out and explore the world.

While it initially appeared like Niantic was uninterested in hearing what players had to say, the company eventually caved in and stated that the changes will not be reversed.

Niantic and Fold’s new metaverse is based on the same principles as Pokemon Go, it’ll be interesting to observe how gamers and Fold users react to strolling around in the real world. However, because there are more concrete rewards to be gained than just event-specific pocket monsters, everyone may want to get out and walk.