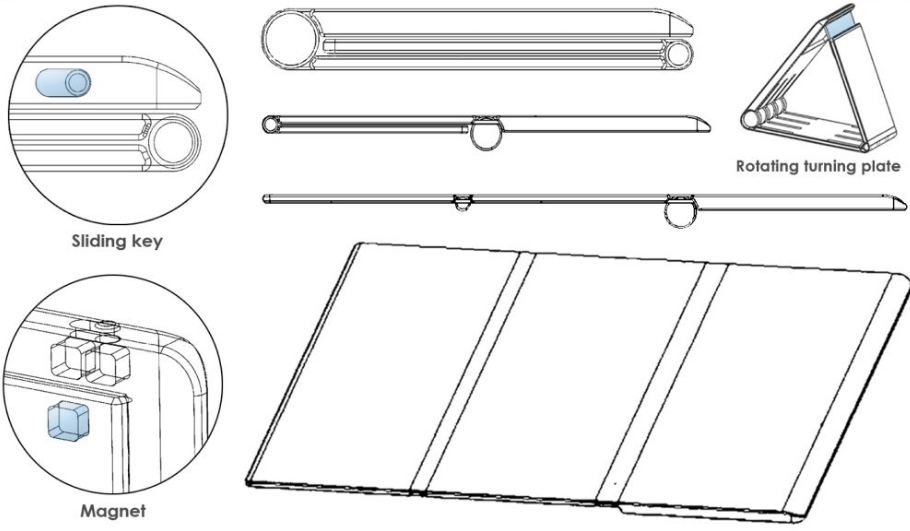 OnePlus appeared like it was going to steal the Samsung Galaxy Z Fold 3’s thunder with its own foldable earlier this year… Only to discover that it was an elaborate scam touting a 50% discount.

While that experience may make consumers who want a OnePlus-branded foldable more suspicious in the future, it appears that the Chinese business is testing the waters in that market.

Let’s Go Digital has discovered a patent for a OnePlus foldable that would be significantly different from the existing alternatives on the market, with a double-hinged, tri-fold design that can be propped up as a triangle, or unfurled completely to be a long, tall tablet.

At first inspection, this design appears to be similar to Samsung’s reported ‘Z’ fold-shaped triple-fold design. However, it’s more of a ‘G’ form, with two-thirds of the folding display remaining on the outside and one working as the cover when it’s in phone shape.

When in use, the phone will reportedly employ a magnetic sliding mechanism to lock itself in place and prevent it from folding back on itself.

According to the website, this indicates the phone will be somewhat thicker than existing smartphones, but still slimmer than a ‘Z’ shaped gadget.

However, the gadget’s two hinges have different widths, which, combined with the thicker primary display component, may cause the tablet to wobble when set flat in its unfolded position.

Is it preferable to fold twice? To be certain, we’d need to test a prototype, but the use cases stated by LetsGoDigital seem a little flimsy at this moment. Yes, the ability to flip between a double and triple-sized screen may be handy in some situations.

However, the patent also specifies how the phone might be used by two individuals at the same time, with one side showing YouTube and the other displaying chat software. That sounds like a use case that few if any, people have ever yearned for.

Is that worth adding a second mechanical hinge for, given that the reliability of the hinge system was the source of Samsung’s problems with the first Galaxy Fold? We’ll have to wait and see what happens.

However, it’s important to note that many patents never make it from theoretical notion to commercially viable product, and there’s a strong possibility that will be the case here as well. Even if OnePlus does release a foldable in the future, it may look substantially different from this.