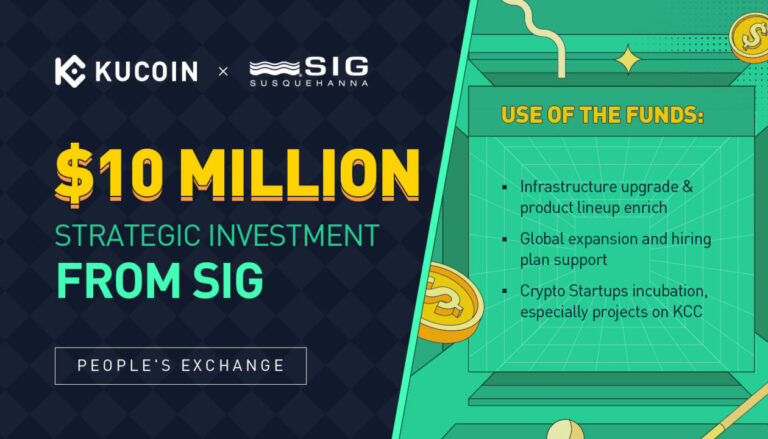 According to recent reports, popular cryptocurrency exchange KuCoin has managed to raise nearly 10 million dollars in a rather strategic investment from Susquehanna International Group (SIG), which is known to be one of the largest quantitative trading firms.

Not just that, both the firms are known to have partnered in order to incubate blockchain start-ups as well as build KuCoin tokens and the KuCoin Community Chain ecosystem. Moreover, this comes just a few weeks after the side crash of the video format app Chingari’s Gari token, which actually is said to have started from KuCoin’s platform, which indeed held the highest number of tokens.

In addition to this, it is said that KuCoin will be utilizing this fresh capital for the purpose of upgrading its platform infrastructure, hiring, and global expansion well as enhancing its so-called product line-up.

Having found back in 2017, KuCoin is a platform that has managed to develop into a top 5 crypto exchange with nearly 20 million users globally. Simply known as a collection of altcoins, the platform is said to support over 700 tokens as well as 1200 trading pairs.

Johnny Lyu, CEO of KuCoin, stated, “KuCoin has been through a few crypto cycles, and we are committed to building no matter what. We are delighted to announce that we have found another partner with the same vision and values. The support of SIG will solidify our leading role as a centralized exchange and facilitate our ecosystem expansion in the decentralized Web 3.0 world.”

“Part of the funds will also be used to support the development and improvement of the KCS and KCC ecosystems with a focus on social aspects, DAO (decentralized autonomous organization) infrastructure, and decentralized communities,” Lyu added.

According to its 2022 H1 Review Report, KuCoin has achieved over $2 trillion in trading volume, a 180 percent increase compared to the same period in 2021, said the company. On a similar note, in May 2022, kuCoin raised about 150 million dollars led by Jump Crypto with a pre-series B round, thus bringing its total investments to 170 million dollars with Round A combined, at a total valuation of somewhere around 10 billion dollars.

All in all, kuCoin is recognized as a global cryptocurrency exchange with its operational headquarters in Seychelles and offers about 700 virtual assets. Currently, the platform is providing Margin trading, Spot trading, staking, Lending, futures trading as well as P2P fiat trading.

In conclusion, what are your thoughts on KuCoin’s recent fundraiser? Do let us know in the comments area below. To know more about such reports, do check out other articles we have on our website. Thank you for your time & if you found our content informative, do share it with your investor friends!