Ray Dalio, the billionaire hedge fund manager, revealed that he owns Ether and explained why cryptocurrencies are so astounding. Ray Dalio gets into Ether and praises crypto as he calls cash the worst investment. 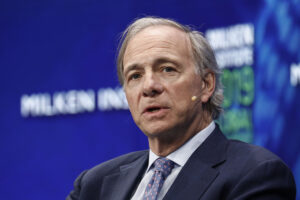 According to Bridgewater Associates’ CIO, cryptocurrency provides an option in an atmosphere when the value of cash is declining. Cash, he said, is the “worst investment” and a “difficult asset” that will lose 4% to 5% in value due to inflation.

Ray Dalio gets into Ether and praises crypto

Hedge-fund legend Ray Dalio has praised cryptocurrency, confirming that he owns Ether in addition to bitcoin and claiming that cash is the “worst investment.” For years, the wealthy investor was skeptical of the Bitcoin “bubble,” but he changed his mind this year and purchased the biggest cryptocurrency.

Dalio stated that he’s added Ether to his portfolio in a Yahoo Finance interview on Thursday, but that he doesn’t own a large amount of either Bitcoin or Ethereum’s native cryptocurrency. He told Andy Serwer, “I’m not going to divulge the exact number of bitcoin or – but I do possess some ethereum, as well.” “I don’t have much of it.”

Dalio, the founder, and co-chief investment officer of Bridgewater Associates, the world’s largest hedge fund, told Yahoo that he believes in diversification and that cryptocurrencies make up “a modest part” of his portfolio. He went into detail about why he believes digital assets are a worthwhile investment.

“In an atmosphere where the value of cash is deteriorating in actual terms,” he remarked, “I see it as an alternative money.”

“And I think it’s impressive that the programming has held up for the past 10-11 years. It hasn’t been hacked or anything like that. It also has a high adoption rate.” Bitcoin’s acceptance in the financial mainstream is increasing. Meanwhile, Ethereum’s popularity has been buoyed by the promise of decentralized finance, or DeFi, which aims to eliminate traditional banks and other middlemen from transactions.

In November, cryptocurrencies hit new highs as institutional money began to pour into the digital token economy. According to TradingView data, Bitcoin and Ether have climbed 62 percent and 420 percent this year, respectively. However, they have recently retreated, with bitcoin down 3.5 percent and ether down 5.4 percent on Friday.

The tycoon, who has previously referred cash to trash, has underlined his disdain for fiat currency, calling it the worst investment. The debasement of fiat money, he contended, has made assets like bitcoin appear more inflation-resistant as a result of governments’ enormous fiscal stimulus to help economies through the pandemic. “Cash, which most investors believe is the safest investment,” Dalio added in the interview, “is, in my opinion, the worst investment.”

“Don’t judge anything in your returns or your assets in nominal terms, in terms of how many dollars you have. View it in terms of inflation-adjusted dollars,” he added.

Consumer price inflation in the United States reached its highest level in over 40 years in November. Cash, according to Dalio, is a “very lousy asset” because of increasing inflation, which will erode its purchasing value. He remarked, “The message is that cash is going to be a troublesome asset.”

“Keep that other diverse asset portfolio – keep it, in actual terms, not nominal terms. To have a well-diversified portfolio, that diversification should include worldwide diversity from countries, not simply asset types.”

Also read: Everything You Need to Know About Shibnobi Token