The Road To Hyperloop: Everything From Alpha To The Boring Company

Hyperloop, a name that sounds like a science experiment, has been taking over the transportation technology like a bullet in the recent years. It was popularised after the billionaire entrepreneur Elon Musk first released a white paper on the concept as Hyperloop Alpha on August 12, 2013.

A look at Google Trends for the term ‘Hyperloop’ will give you an image of how popular the search was for Hyperloop was when he first open sourced the technology to the entrepreneurial community.

For those of you who are thinking 2013 was the first time, the term “Hyperloop” was first used in the open, here is the news. He had previously hinted that he would be publishing something on the Hyperloop in a four weeks on 15th July 2012 and that it would be open sourced, not patented.

Will publish something on the Hyperloop in about four weeks. Will forgo patents on the idea and just open source it. Not a vac tunnel btw.

While there were no updates since 2012, the white paper released by Musk and his team at SpaceX in 2013 revealed the fifth mode of transportation was a means to avoid California’s “high speed” bullet train that is both one of the most expensive per mile and one of the slowest in the world.

According to the paper, Hyperloop in layman’s terms consists of a low-pressure tube with capsules that are transported at both low and high speeds throughout the length of the tube. The capsules are supported on a cushion of air, featuring pressurized air and aerodynamic lift.

Here is a small infographic on the capsule designs by Space.com

The capsules are accelerated via a magnetic linear accelerator affixed at various stations on the low-pressure tube with rotors contained in each capsule. Passengers may enter and exit Hyperloop at stations located either at the ends of the tube, or branches along the tube length.

The fifth mode of transportation’s concept was a variant of the “the very high-speed transit system” proposed by R. M. Salter as early as August 1972 pointed first out by Business Intelligence. In the paper, it is defined described that the VHST’s “tubecraft” ride on, are driven by electromagnetic waves that are generated by pulsed or by oscillating currents in electrical conductors.

One of the drawbacks of this paper was that the speeds required to achieve this effect were as high as 14,000 mph as examined by Rand Corporation.

Although this was not the only issue, Musk’s model was designed to overcome several limits of the Rand Model and was aimed to be better than the current model of Evacuated Tube Transporation Technology or popularly known as ET3 incorporated in 1997.

For starters, ET3 was literally defined as “Space Travel on Earth”. Its founder Daryl Oster came across tube transportation technologies during his mechanical engineering courses in the 1980s and was stuck with the idea of developing silent, low cost, safe, and electric transport that was faster than the jets.

Here is a video of ET3’s presentation at IdeaCity in 2015.

Picking on the breadcrumbs left by Musk’s Hyperloop Alpha, there were two companies who initially tried to make this fifth transportation technology’s vision a reality. Surprisingly, both were named one or the other variations of “Hyperloop”.

Hyperloop Transportation Technology aka HTT was founded in November 2013 as a movement by over 800 engineers, scientists and creators with highly specialized backgrounds working across 38 countries. The team is led by Dirk Ahlborn and Bipop B. Gresta.

“Two weeks after the white paper was published my co-founder got the go-ahead from Elon to take up the project and my co-founder and I started the company in two months after publishing the paper,” said Gresta in an exclusive to TechStory. 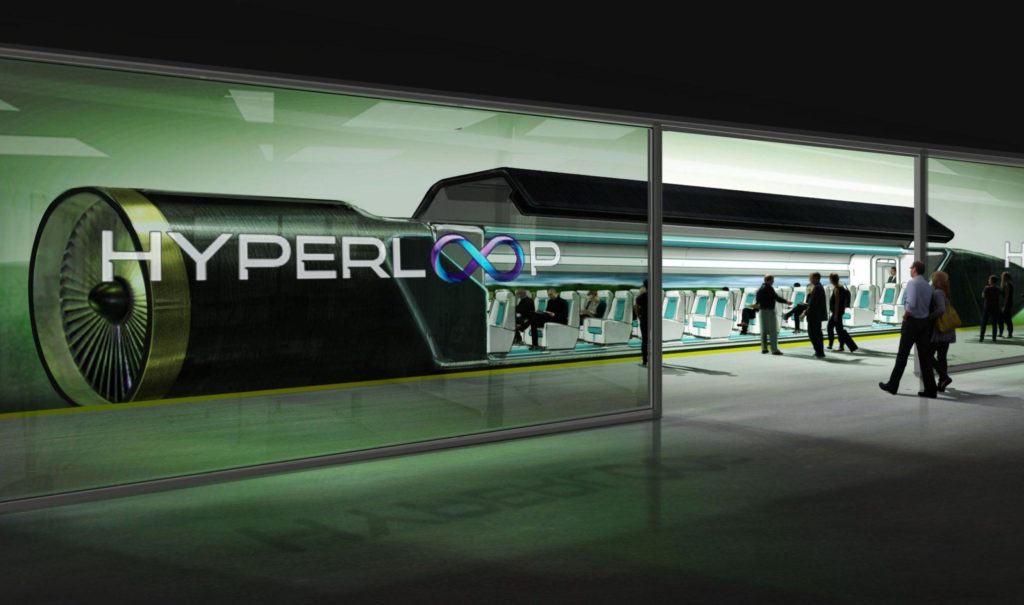 The other company which has been competing in the Hyperloop space is Hyperloop Technologies aka Hyperloop One. Founded in 2014 and headquartered in Los Angeles, the company is led by CEO Rob Lloyd and co-founded by Executive Chairman Shervin Pishevar and President of Engineering Josh Giegel.

Both the companies have been actively competing in the Hyperloop race globally, and their focus towards India in the recent times has been pretty strong. Even the entire nation’s interest towards Hyperloop has been seeing new heights in the since late last year.

One of the main attributes for this surge in search trend could be Union Minister Nitin Gadkari’s proposal to offer lands near westerly bypass of Pune connected to the Express Highway for experiments between Mumbai and Pune as a pilot project in September 2016.

Following this, HTT’s Gresta visited India in December last year with a letter of intent to Prime Minister Modi and Transportation minister Gadkari. After the meeting, Gresta said, “They are really willing to make a change in this country. Actually, we are discussing a project here in India. We are on the table to do a feasibility study for a big route.”

Meanwhile, Hyperloop One kick-started its Hyperloop Vision for India early this year. “Prime Minister Narendra Modi’s vision for transforming India and the role he sees of technology in driving this change is indeed remarkable,” said Shervin Pishevar, Executive Chairman of Hyperloop One. in a statement. Hyperloop One had put up four potential routes on which Hyperloop could be operated in India.

HTT is also in discussions with five Indian states to build a high-speed travel network and will also raise $100 million to invest in the country. “We have five offers on the table from five chief ministers. We spoke to them and the one that will give us the land we will go and build. We have local partners and we are now raising $100 million and bringing another investment from abroad,” as per a report by Indian Express.

While Hyperloop One had started its own set of Hyperloop One Global Challenges (HOGC), the initiative was kick-started by SpaceX to encourage enthusiasts and innovators in high-speed transportation services and solutions to design the pod.

SpaceX laid the initial test track for approximately one mile in length and six-foot outer diameter at its headquarters Hawthorne, California.

Want to experience how a ride in Hyperloop would be? Here is a small test that was run by the SpaceX team this February. If you have VR glasses, then don’t forget to put them on.

The goal of the competition is to accelerate the development of functional prototypes and encourage innovation by challenging teams to design and build the best high-speed pod.

The first round of the competition that took place this January, witnessed the teams running their pods in the Hyperloop test tracks constructed by SpaceX team.

Here is a summary of what happened during the competition.

For the second round of the competition that is set to take place this August, there were 24 teams shortlisted across the world and their designed test pods will be judged according to their maximum speed with successful
deceleration (i.e. without crashing).

One of the 24 teams that will be a part of this competition is India’s BITS Pilani team, Hyperloop India, along with names like University of Texas, Binghampton University, the University of California among others.

The initial team of 5 started working on the project as Sibesh Kar, founder and team lead of Hyperloop India was motivated to meet Musk. Prithvi Sankar, one of the members of Hyperloop team, in an exclusive to TechStory, stated, “After meeting Musk during the initial presentation, Sibesh Kar realised that we were the only team from India and we need to take it to the next level”.

Here is a small video of what the Indian team has in place for the competition.

The team currently has over 60 members spread across different colleges with immense support from the ecosystem in Bangalore. “We are really thankful that we got Karnataka’s government on board who helped us in accessing the tech facilities. We got end-to-end support from Ripple Technologies for manufacturing support, that was again a great boon. We got Workbench Project as our co-creation partners, who were providing us with space and other electronics support” he added.

Over the years many companies have tried to compete in the Hyperloop race, while some have remained relevant like the Hyperloop One who has managed to raise $141 million so far and the Hyperloop Transportation Technologies who are currently functioning with their $30 million raised last year; others are trying to remain relevant.

Source: Crunchbase (Note: The Boring Company is owned by Musk)

To give a better context of why The Boring Company was included in the list, it was originally formed to develop tunnel boring technology and build underground transportation technology, where the tunnels were not to be confused with Hyperloop tubes..

A glimpse at what The Boring Company’s plans with its tunnels.

The electric skate one can see in The Boring Company’s promo can transport automobiles, goods, and/or people. And if one adds a vacuum shell, it is now a Hyperloop Pod which can travel at 600+ miles per hour.

While it was initially speculated that The Boring Company was boring tunnels for Hyperloop pods and will not officially be developing Hyperloop pods, it came as a shocking development when Musk announced that he was officially in the Hyperloop race.

“While we’re encouraged that others are making some progress, we would like to accelerate the development of this technology as fast as possible,” said a statement from Boring to Bloomberg.

One also needs to remember that the term “Hyperloop” is officially trademarked by SpaceX, while Hyperloop is okay with competitors using the names, the notice on the Hyperloop.com site that read “We are not developing a commercial Hyperloop ourselves” disappeared this year.

While Elon Musk obviously keeps everyone on their toes with his tweets, here is Elon Musk discussing his new project digging tunnels under LA, the latest from Tesla and SpaceX and his motivation for building a future on Mars in conversation with TED’s Head Curator, Chris Anderson.

What do you think is going to be the next big development on the Road to Hyperloop?