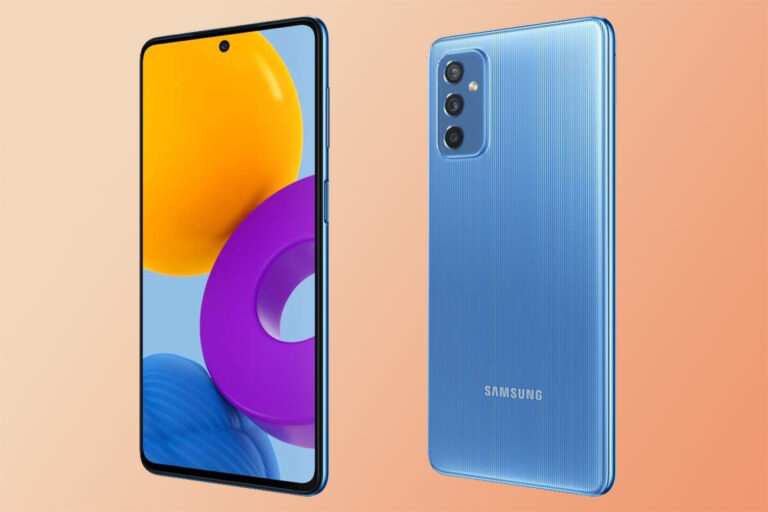 The Samsung Galaxy M52 5G is now launched in India. The device has a super-thin form factor, a strong 5G-capable processor, with 120Hz display, and plenty of other high-end features. So, before we get into the price and availability details, let’s have a look at the Galaxy M52’s main specs and features.

The smartphone features a punch-hole cutout in the center for the selfie camera, a triple camera configuration in a rectangular module, as well as a side-mounted fingerprint sensor for biometric authentication. The smartphone comes with a 7.44mm thick chassis and accommodates 11 5G bands, making it one of the thinnest smartphones launched in India this year.

The back panel of the Samsung Galaxy M52 5G features a pattern texture, similar to that of the Galaxy F62. The phone has a massive 6.7-inch FHD+ display with a resolution of 2,400 × 1,080 pixels, a punch-hole cutout for the selfie camera, a refresh rate of 120Hz, and a Corning Gorilla Glass 5 protection.

In terms of cameras, a 64MP primary sensor featuring f/1.8 aperture, a 12MP ultra-wide-angle lens having f/2.2 aperture, and a 5MP depth camera with f/2.4 aperture comprise the triple camera configuration on the rear. On the front, there’s a 32MP camera for selfies and video calling.

The Samsung Galaxy M52 comes pre-installed with the OneUI custom skin on of top Android 11, as well as 5G, 4G LTE, dual-band Wi-Fi, Bluetooth 5.0, NFC, GPS, and a USB Type-C connection for charging and data sync. It is driven by the Qualcomm Snapdragon 778G SoC, which is coupled with 6GB of RAM and 128GB of internal storage, out of which 101.5GB is available to the user. There is also support for a MicroSD for storage expansion.

The phone is powered by a 5,000mAh battery with 25W fast charging capability. The smartphone will be offered in Blue, Black, and White. Talking about sensors the Samsung Galaxy M52 houses an accelerometer, geomagnetic sensor, light sensor, gyro sensor, and proximity sensor. Knox security, Dolby Atmos, a Game booster, with 4GB of additional virtual RAM are all bundled with the smartphone.

The Samsung Galaxy M52 5G costs Rs 29,999 for the 6GB+128GB model and Rs 31,999 for the 8GB+128GB variant. As an introductory offer during the Amazon Great Indian Festival sale, the smartphone will be sold for Rs 26,999 and Rs 28,999, respectively, for a limited time. Bank discounts include a 10 percent instant cashback on HDFC Bank Debit and Credit cards and EMI, with 6 months free screen replacement.