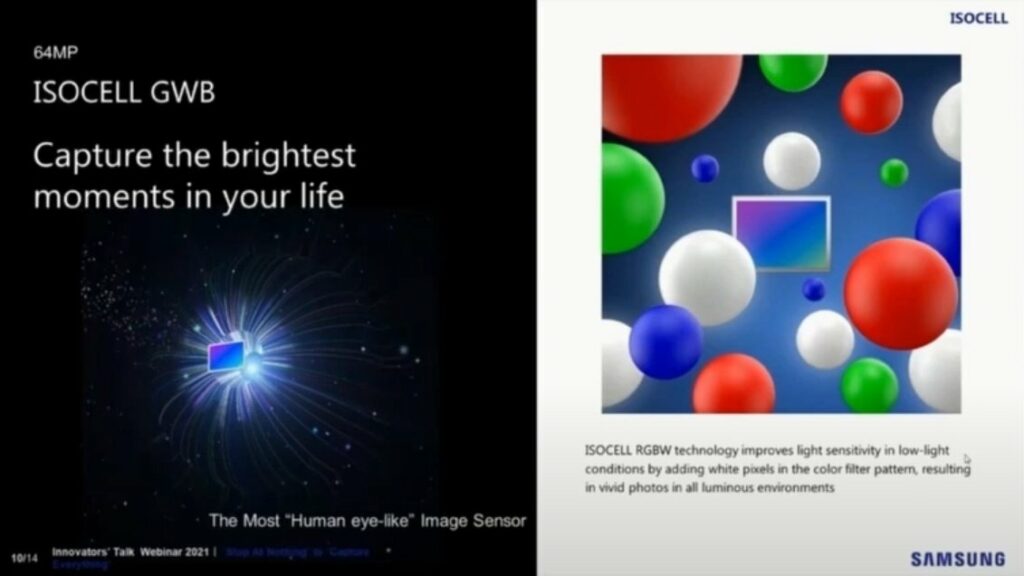 Samsung is now working on the development of its first ISOCELL camera sensor with an RGBW colour model. During a webinar conducted by Tecno Mobile, the business verified that it is actively working on this sensor.

During the webinar, Samsung revealed that it is developing an ISOCELL camera sensor with an RGBW colour model, dubbed the ISOCELL GWB. Aside from the name, the business also announced that the sensor will have a resolution of 64 megapixels. This disproves rumors about the sensor having a 50-megapixel resolution.

During the webinar, Samsung Electronics China’s Vice President and Head of R&D announced that the ISOCELL GWB will be “the most human eye-like image sensor.” He went on to say that this is achievable because of the RGBW colour filter design, in which a new white pixel boosts the sensor’s light sensitivity for better low-light images while simultaneously improving colour accuracy.

The new ISOCELL GWB sensor was developed by Samsung in collaboration with Tecno Mobile, implying that the sensor might be in a Tecno smartphone as early as next year. It will, however, not be limited to Tecno and will be marketed to other smartphone manufacturers as well. It is also anticipated that it will come in future Samsung devices.

While Samsung has announced the release of their next RGBW sensor, it is not the only one that the firm is working on. According to earlier leaks and rumours, the business is also working on a 50-megapixel RGBW sensor that is expected to be released next year.