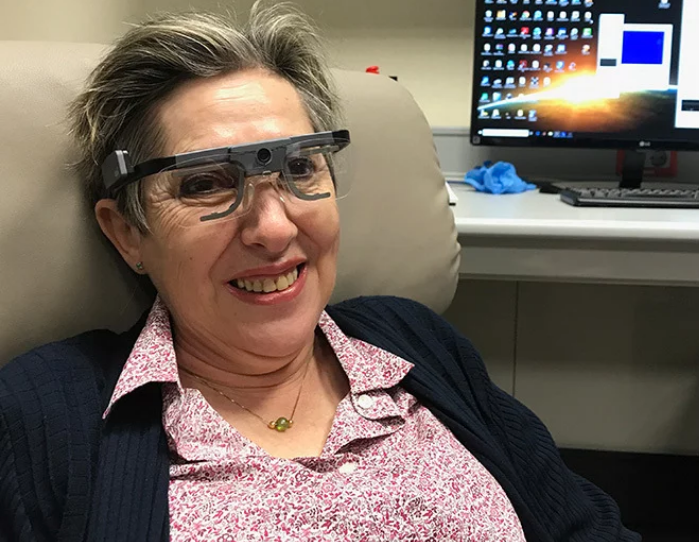 According to American and Spanish researchers who collaborated on the project, a former science teacher who had been blind for 16 years was able to see letters, discern the edges of objects, and even play a Maggie Simpson video game thanks to a visual prosthesis that included a camera and a brain implant.

According to an abstract of the study published this week in The Journal of Clinical Investigation, the test subject wore the implant for six months and had no disturbances in her brain function or other health concerns. The work advances a “long-held hope of scientists” to provide blind people with rudimentary sight by transmitting information straight to the brain’s visual cortex.

“These results are very exciting because they demonstrate both safety and efficacy,” said one of the lead researchers, Eduardo Fernández of Miguel Hernández University, in a statement. “We have taken a significant step forward, showing the potential of these types of devices to restore functional vision for people who have lost their vision.”

A sensor transmits visual information straight to the brain

A neurosurgeon placed a microelectrode array into the visual brain of Berna Gómez, a former teacher who has been blind for more than 16 years, for the experiment. The implant was then linked to a video camera that was installed in the middle of a pair of spectacles.

Gómez was able to understand visual information sent straight to her brain from the camera after a training session. A video game was incorporated in the training to assist Gómez to understand how to read the data from the electrodes.

A panel in the game suddenly displays a picture of Maggie Simpson brandishing a pistol in either her left or right hand. The player must correctly pick which hand wields the weapon; Gómez learned how to do so by leveraging input from the array.

Gómez was 57 years old at the time of the investigation. Gómez was recognized as a co-author of the study as a result of her participation, including her capacity to provide clinically precise comments to the investigators.

Some of the results of the prosthesis were limited; for example, it did not allow Gómez to differentiate all letters of the alphabet. She “reliably discriminated various letters such as ‘I,’ ‘L,’ ‘C,’ ‘V,’ and ‘O,'” according to the study.

The microelectrode array was implanted through a “minicraniotomy,” a method that the researchers describe as “simple and follows normal neurosurgery procedures.” It entails drilling a 1.5-cm hole in the skull (a bit larger than half an inch).

The array is just 4 mm square (approximately an eighth of an inch), yet it has 96 electrodes. A previous study has revealed that roughly 700 electrodes can provide a blind individual with adequate visual information to improve their movement to a reasonable amount, according to the researchers. Because the implant only required tiny electrical currents to excite the visual cortex, the researchers want to use additional microarrays in future studies.

“One goal of this research is to give a blind person more mobility,” said Richard Normann, a researcher at the John A. Moran Eye Center at the University of Utah. “It could allow them to identify a person, doorways, or cars easily. It could increase independence and safety. That’s what we’re working toward.”

A clinical trial connected to the topic is set to run through May 2024. The research is supported by numerous organizations, including Spain’s Ministry of Science and Innovation, Miguel Hernández University, and the Moran Eye Center.

The method of completely bypassing the eyes could someday restore vision to approximately 148 million people worldwide, according to the researchers. This is the number of people who have had the link between their eyes and their brain severed due to conditions such as glaucoma or optic nerve atrophy.

The method utilized by the researchers from Utah and Spain is similar to one that was lauded last year when scientists claimed to have been able to persuade participants to read letters by transmitting electricity through electrodes on the surface of the brain.

Visual impairment is one of the most prevalent impairments in the world, and scientists are developing a variety of techniques to assist those who suffer from it. In another recent triumph, scientists utilized the CRISPR gene-editing technique to tweak DNA in humans to aid in the treatment of a rare hereditary eye illness.