Skynet trends on Twitter as twitterati dances along with the Boston Dynamics video.

Twitter is dancing along with the Boston Dynamics video that features Atlas, Handle, and Spot dancing to “Do you love me.” The video that came out not so long ago had sparked several discussions. Because with the beats, creativity and technology merged at a quite awe-inducing level. The same video was posted on Twitter by Vala Afshar with the caption, “Imagine what AI-powered machines will be able to do in the next 5-10 years.”

Imagine what AI powered machines will be able to do in the next 5-10 years.

The post sparked a discussion about the immense potential of robotics that can take the future by storm. And soon enough the discussion took a different turn with netizens drawing parallels with Skynet. Not so surprisingly with the tweeting and retweeting in full swing, we have another name added to the trending list on Twitter.

Dancing Robots or Minds In Trance?

While most users were commenting about the brilliance of the video and the future possibilities of the field, others were hell-bent on proving that the video was computer-generated imagery(CGI). As brilliant as the discussion was, there is no discussion about artificial intelligence and robots without the question of a day when robots will take over the power quotient from humans and assume supremacy over the creators. 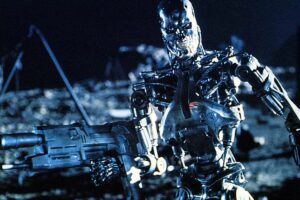 And with movies like terminator to refer to, there is no dearth of wild scenarios with the imaginations running wild. Who knows? Today, they are dancing sweetly to a sweet song. Nobody can tell for sure if tomorrow it will be a victory dance after taking over the earth. And now Thanos-like destruction of humankind (with no half and half theory) is running through the minds of a good majority of Twitter users. Undoubtedly, Skynet is trending as netizens put forth their wild spectrum ideas within a frame of jokes and memes. And jokes apart, some are seriously concerned. Skynet knocking on our doors is the last thing we want now. Already there is a pandemic dancing around.

As the responses began piling up following the post, soon memes took their rightful place. Even Skynet cannot stop memes from assuming their throne. While a good majority of netizens are putting all their heart and mind into contemplating hypothetical Skynet scenarios, some are just happy to go with the drill and crack random jokes. Here are a few snippets of the wild imagination manifesting in full force on Twitter.

Whether the music is soulful or eerie is another question altogether.

With a little research after seeing #Skynet trending, I discovered the original video from Boston Dynamics before they changed the music behind their “friendly dancing robots” to a catchy 60’s soul tune. Nice try…👀🤖😵 pic.twitter.com/gSmSkL56oG

The scare meter is running high.

Should we dance along with the video or hope that a Terminator will show up?

Imagine when James Cameron comes out and says "I tried to warn you all in 1982 …" #skynet https://t.co/5KLdxKJR1w

Now that is some gory detail.

This is the dance they’ll be doing after each headshot. #Skynet https://t.co/T8JnEqSqxN

Future dancers or Future owners of the planet? Now that is something to mull over.

They look cute, but always remember this'll be who inherits the world, if we don't decarbonize yesterday https://t.co/0EbiYHlJ8U

Things are taking a rather dark turn. Can we just take a deep breath and think that it is just a harmless video of harmless robots dancing. Probably not possible at this point. Because every time you close your eyes, it is Skynet dancing the victory dance.

"Totally fine, nothing to worry about. See it sings and dances for you"…. said the end of humanity #skynet #Terminator https://t.co/vRO2WsEV7z pic.twitter.com/BQdx1XjyBm

Boston Dynamics, are you listening?

And some major future decisions are underway. On second thought, should we get a cannon as well? Just to be on the safer side.

ARE THE AI WATERPROOF?? SHOULD I PURCHASE A STRONG WATER CANNON ASAP?? I’m scared, no cap. #skynet

Major Ultron vibes here. Perhaps it is actually time to hope that Musk will actually colonize Mars. No harm in being optimistic after all.

The day robots are programming other robots, I'm out of a job but we're all probably dead at that point 🤷‍♂️ #Skynet

Let’s end our speculations with some food for thought.

Imagine… mass murder, but to a catchy beat. What’s not to love?! https://t.co/4sEfxQLMgT