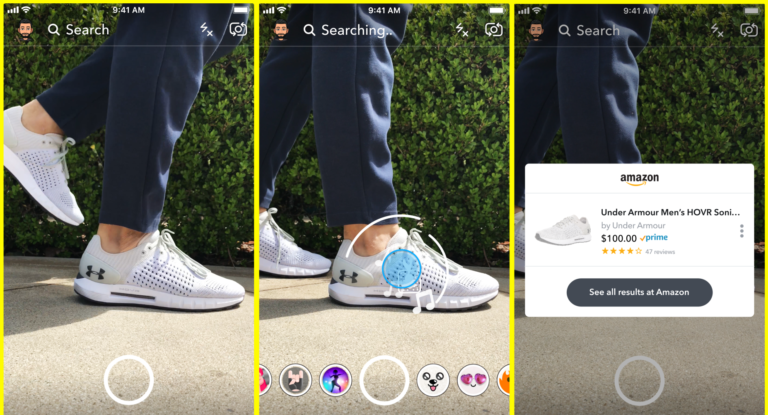 Snapchat has one of the world’s most used cameras, people just love clicking pictures with Snapchat and share them with their friends. One of the biggest reasons for this popularity is Snapchat’s Augmented Reality filters and its Lens feature which has mastered a different league in general photography. It is true the people love things that make them look aesthetic and beautiful and Snapchat’s AR filters are at the top of this list.

Having said that, Snapchat has recently upgraded its camera and it will change how users search on the platform. Yes, Snapchat has launched a new “Visual Search” feature.

Snap Inc. announced this feature sometime in May and speculations suggested that it will be the highlight of the app with prominent placement. Visual Search feature is integrated within the app’s “Scan” feature and just by pointing the Snapchat camera on an object and holding the Scan button, the app will suggest you with lenses and music that goes best with your surroundings.

For instance, if you point your Snapchat camera on a Dog and press on the screen to enable “Scan”, the app’s visual search will show you the best Augmented Reality filters and lenses for dogs and music that goes along, to make it your best clip.

As mentioned in a report by Engadget, Snapchat has been playing around with Visual Search since 2019 in the form of its “Scan” feature. This feature can let you solve math problems, like seriously! Other than this, it can identify plants, music and scan your food and drinks for labels with its masterclass camera. Snapchat’s latest update will bring these features to life and place them at a prominent position in the app, so that the user need not tap, tap, tap and tap to enjoy this feature, just one tap and Snapchat’s Visual Search will serve you.

Sources reveal that Snapchat has also integrated these features in its AR Spectacles and is developing new features and products to refine the user experience. The company has laid its groundwork on innovation and is breaking the barriers with its Augmented Reality-based products.

Instagram and TikTok are also moving along the lines with Augmented Reality capabilities being integrated within their respective camera applications but Snapchat is most likely to remain the OG in this category.

Furthermore, Snapchat has grown in popularity with its Spotlight feature, especially after the company started to monetize its creators. Adding camera shortcuts to Spotlight will definitely bring a new touch to the app and creators will have a lot of new features to play around with.