Solar Roadways and The Hurdles In Implementing Them ! 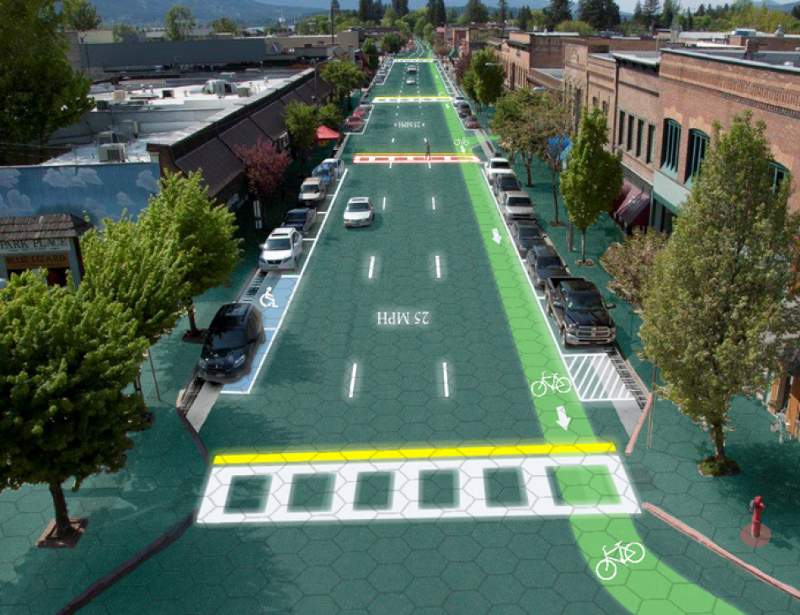 Solar roadway is a brilliant concept put forward by Julie and Scott Brusaw. It made lots of news last year when it raised $1.38 Mn. last year through crowd funding.

The idea is to cover all of the asphalt by solar panels that will generate electricity roughly three times greater than consumed by USA. Apart from that, the idea says that the solar panels will be intelligent enough to melt the ice on road and the like.

Let me first give a sneak preview to a reader who doesn’t know what the heck a solar roadway is. And then, I will go over the advantages and disadvantages to express my views on the same.

The Construction of Solar Roadway:

1. Road Surface Layer: This is a high strength translucent layer at top, over which vehicles will be moving. It will be having solar collector cells, LEDs and heating elements embedded within it. The LEDs with provide a safe night travel and an aesthetic look to the road in nights.

2. Electronic Layer: This layer contains photovoltaic cells to absorb solar energy. This layer also houses a microprocessor and few sensors that sense the amount of pressure and temperature of the upper surface. This electronics present in this layer can sense the presence of snow on the road and are capable of eliminating it.
Apart from that, the microprocessor also controls the lighting, signaling and other functions. It is this layer that converts solar highway into an intelligent highway.

3. Base Plate Layer: This is the layer at the bottom that protects the electronics as it is weatherproof. Apart from that, while the electronic layer collects solar energy, it is this layer that distributes it.

It’s easy to infer advantages of such a roadway that looks sexy and is a source of renewable energy. Another advantage that I can see is that it has potential to provide electricity to the remote areas also and I can rephrase a famous saying as –“Where there is a solar road, there is the electricity.”

As Nicholas Spark say “Nothing that’s worthwhile is ever easy. Remember that.” These lines of him are well suited for the hurdles that are there on the way which leads to the solar roadways. I am mentioning some of them that are striking my mind.

Hacking: First and foremost thing that struck my head while researching about this intimidating concept was hacking. It is proposed that LEDs (on layer #1) will be programmed to provide various kind of information (see the pic) to the drivers and pedestrians. For example, these LEDs will be telling a driver to maintain a speed, displaying distance of a particular city, direction headings and the like.

Now what if someone hacks the system and provides wrong information to the people on road? And what if the hacker switches off all the LEDs in night?

Cost: Solar panels made of crystalline silicon, are going to replace the asphalt on solar roadways. In general, one square foot of asphalt cost $16; on the other hand, the solar panels are going to cost around $48. Apart from that, the LEDs that are proposed to be embedded within the first layer for signage are way more expensive than solar cell for per square foot. To give you an estimate, this person built an LED coat that covers his body and he is selling it at $24,995 (Front half only).

Now let say, due to economies of scale and mass production, the cost for blanketing the same area will get reduced to $20000. I don’t think it will go below that and now you can easily infer that how costly it’s going to be.

Driving in Rainy Season: I may be assuming, however, I believe that driving on a glass surface on a rainy day is going to be difficult for any driver out there. The road will become slippery and braking will becoming inefficient due to reduction in friction.

Apart from that, the roadway will become a liability rather than asset in rainy season as it won’t be producing any electricity at all.

Durability: The durability of such roadway is another issue. On a highway, where large sized trucks constantly move, the glass may or may not be able to withstand the pressure. And on Indian highways, where trucks and buses are always overloaded, I am quite sure that the glass will not survive.

Other Articles By Nitin Balodi: