Elon Musk recently replied to a tweet that at least 15% of the Raptor performance will be improved and the number of engines installed on Starship by 50%. These updates come when the Starship is being developed and modified for its debut launch. To be launched with Super Heavy Booster, it was to use a boost variant of greater thrust vector control (TVC) for a better thrust. 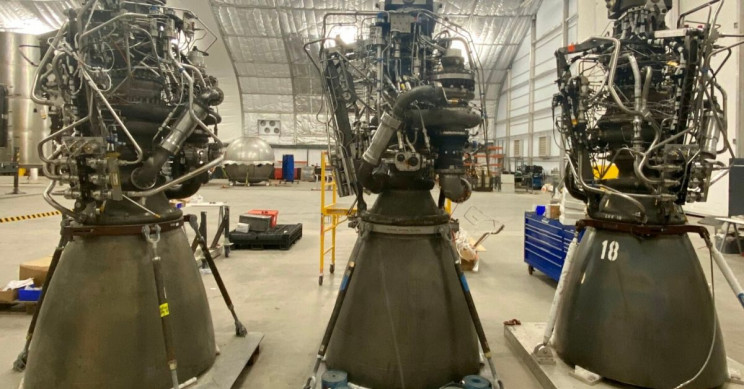 A wide throttle range of thrust is to be improvised for the Super Heavy Booster. On June 3rd, there were some photos clocked about 3 new Raptor engines being located in the Boca Chica Starship factory. And two labels on the two engines can be seen as RB3 and RB4. Predicting that they completed testing in McGregor, Texas.

It could be a possibility that some Raptors on booster may be fixed or gimbaling with the same power as the base Raptor. At the cost of Gimbal and throttle authority, a 50% increase of thrust was expected. However, it turns out that there is no ability to Gimbal, but would possibly have throttled.

Initially, Elon Musk replied under the tweet retweeted by @MarcusHouse. Says they are planing for the base Raptor thrust to increase to 230 tons or 500 million lbs. Then when asked about what’s the point when all Raptors will be the same, Just with a Rboost. Elon Musk explains that center engines will indeed be the same as booster engines. However, Vaccum Raptor will be the only variant. For now, SpaceX seems to be considering using vacuum raptors.

Center engines on ship will be same as booster engines. This is basically Raptor 2.

Raptor Vacuum would be only variant. Tbd as to whether to commonize R-Vac with Raptor 2 (more thrust), keep same or tighten throat (more Isp).

As SpaceX managed to boost Raptor 2 performance, the weight is 230 tons of thrust. With a peak lift off at 7600 tons the Super Heavy Booster with 33 engines is reasonable. As the thrust to weight ratio will be 1.5, the large liquid propulsion only rocket improves its acceleration. It enables the rocket to reduce gravity losses initially after the launch and boosts overall efficiency.

A month ago, the base increase from 28 engines to 29 engines was expanded to 32 engines. After adding three Vaccum raptor engines, SpaceX would be left with six Raptor vacuum and three sea-level optimized engines. But Elon Musk says that it is a possibility, and SpaceX is considering adding the vacuum raptors to the Raptor 2 engines. It would increase the thrust of the engines. Without the extra vacuum raptors, the Starship would still be able to generate 2000 tons of thrust in a vacuum. The upper stage would be as powerful as Falcon Heavy.