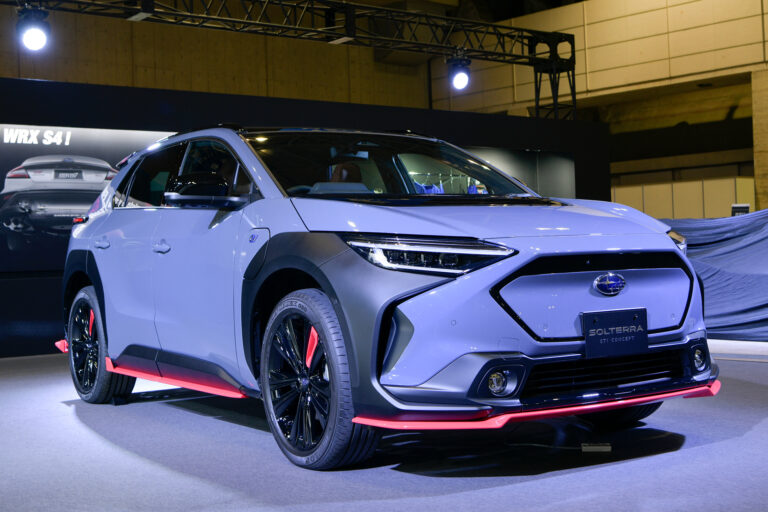 Subaru unveils 1,073 hp STI E-RA concept car during the Tokyo Auto Salon. The company says that the STI E-RA concept car is to gain “experience and training of new technologies in the world of motorsports in this carbon-neutral era.” This concept doesn’t have much in common with the on-road Subarus in current models.

It looks like the company has its eye on a clocking record-setting 6 minute, 40-second lap at the Nürburgring’s North Loop sometime in 2023. If they really set the record, the vehicle will be beating the Tesla Model S Plaid record set last summer. The vehicle does have the features is needed to beat the record set.

The STI E-RA concept has features GT-style, high-downforce composite bodywork that’s wrapped tightly around the wheels. The cutouts of the vehicle help the vehicle push the air out and increase the speed. While accelerating towards the towering rear wing and the air pull-out concept for its wheels will work in concert with a carbon-fiber splitter up front, Formula 1-style bargeboards, and (what seems to be) a tall, highly-developed rear diffuser. The STI concept car’s roof-mounted intake scoop evokes the iconic, WRC Imprezza rally car of the aughts and early 2010s. Also, it looks like the 60 kWh battery pack gets air for the cooling system because of the scoop.

The vehicle has four motors and a new torque vectoring system for painting the grip between the wheels. Each wheel has independent torque depending on load shifts using sensors. These sensors get various variables- wheel speed, steering angle, g-force, yaw rate, brake pressure, and wheel load.

Despite whether the vehicle actually sets a record or not, Subaru seems to be going ahead with more plans for the STI concept. They haven’t officially talked about getting into racing series. However, it used a specific method of motor-to-wheel attachment that is included in the FIA’s future E-GT regulations.

The new concept really surprised the auto industry as Subaru is serious about entering into the racing series. Especially considering that it is an electric racing car. Automakers have been working on electric race cars, and the competition is getting tougher as many new brands are entering the race. It includes both technology and the features of the vehicle. It involves traditional race car makers competing with the automakers who have advanced technology for their vehicles. And there are more details that are yet to be unveiled.