Tech stocks look to be in deeper trouble Another hot inflation reading sparks concerns that Fed policy will get tighter, sooner, weighing on technology shares.

The S&P 500 and the Nasdaq fell more than 1% each on Tuesday after data showed producer prices increased more than expected in November and ahead of a potential decision on faster tapering from the U.S. Federal Reserve this week. 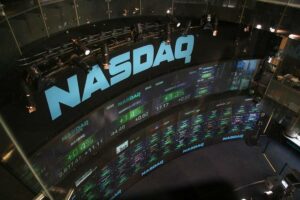 “Our base case is that the Fed doubles its pace of QE tapering which would, in theory, but the March meeting in play for policy rate liftoff,” says Lauren Goodwin, economist and portfolio strategist at New York Life Investments. “We also expect the Fed’s median ‘dots’ to show rate hikes earlier in 2022, with likely two hikes next year.”

“Yet, bond yields don’t seem to be worried about inflation sticking around as the 10-year [Treasury] sits 20 basis points below pre-Thanksgiving levels,” notes Lindsey Bell, chief money and markets strategist at Ally Invest. “While the Fed is more heavily leaning on inflation readings for cues on pace and timing of its monetary unwind, I believe the greater predictor of both inflation and Fed policy will be the job market.”

Tech stocks were a main source of weakness on Tuesday, though the sector trimmed its losses in afternoon trading. Microsoft was a major drag on the market averages, falling 3.2%. Fellow software stock Adobe dropped 6.6%.

Elsewhere, automaker Ford slid nearly 1.9% following news that by 2030 Toyota would be investing $35 billion into battery-powered electronic vehicles, a space in which Ford has sought to establish itself as a leader. Tesla shares fell 0.8% after filings with the Securities and Exchange Commission revealed that CEO Elon Musk sold another $906.5 million in shares.

Cause of Market Down

The down day on Wall Street followed the November reading for the producer price index showing a year-over-year increase of 9.6%, the fastest pace on record and above the 9.2% expected by economists, according to Dow Jones. The index rose 0.8% month over month, above the 0.5% expected.

The hotter-than-expected inflation reading comes as the Federal Reserve also kicks off its two-day meeting on Tuesday. The central bank will release a statement on Wednesday with quarterly projections for the economy, inflation, and interest rates. Chairman Jerome Powell will also hold a press conference.

Investors will be watching closely this week for commentary around if the Fed plans to accelerate the end of its bond-buying program. At present, the central bank’s asset purchase program will end in June 2022, but several officials have spoken about ending the purchases sooner.