Tesla Megachargers in Giga Nevada appear to be operable

Tesla shares pictures of Tesla Semi beside Megachargers in Giga Nevada during the Q4 2021 update. For months now, the Megachargers were appeared to be installed, now it looks like the chargers are ready and so are certain Tesla Semi vehicles. CEO Elon Musk mentioned that Tesla won’t be launching any new vehicle this year, it could be possible that Tesla Semi deliveries will take place. But while Megachargers in the Giga Nevada complex are interesting in their own right, Tesla also made it a point to install some of the all-electric Class 8 truck’s Megacharger stalls at PepsiCo’s Frito-Lay Modesto, CA facility. Images of the charging stalls were shared by members of the Tesla community about two weeks ago. The charging units attracted a lot of attention then since it became evident that the Megachargers were actually very large, possibly about 7 feet tall according to estimates of EV group The Kilowatts.

These Megachargers at the Modesto site appear to have been installed as of the end of January, based on images taken this past weekend. Needless to say, it would be pretty interesting — but perhaps not that surprising — if sightings of some Tesla Semi prototypes start getting reported around the Frito-Lay Modesto facility in the near future.

Pepsico and other customers

PepsiCo is one of Tesla’s key customers for the Semi. During an interview with CNBC last November. CEO Ramon Laguarta mentioned that PepsiCo is expecting its first deliveries of the Tesla Semi by the end of the fourth quarter. It did not come to pass, though public documents were released by Stanislaus County. It revealed that PepsiCo did receive a permit for the installation of Tesla Semi Megachargers on the Modesto site. Other reports from the EV community earlier this month eventually suggested that PepsiCo’s Semi deliveries would likely happen in early 2022 instead. 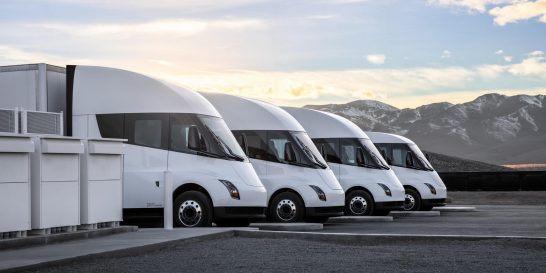 It seems like Tesla and Elon Musk are setting low expectations for the Semi program for this year. The CEO’s statements during the recent earnings call do imply that up to some extent. Despite Musk’s comments, the Semi program does seem to be moving forward lately, and it seems to be catching its rhythm. It would not be productive for PepsiCo to build out Megachargers for a truck that’s coming a year away, after all. Also, while a few Tesla Semis being delivered to one customer is not equivalent to a full production ramp, it does establish the idea that the all-electric truck is a project that the company is dead serious about.