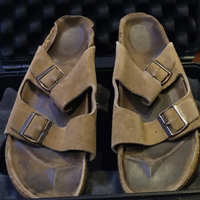 The Birkenstocks that Steve Jobs wore when he launched Apple in the garage went for over $200,000 to a single buyer

The late Steve Jobs had a minimalistic approach to life.

When a few of Jobs’ personal artifacts went up for sale in 2016, Mark Sheff, the estate manager, said, “He kept very few things.”

However, according to Fox 7 Austin, his beloved Birkenstocks only sold for $2,000 at the sale.

The Birkenstocks have since traveled to shows in Milan, Berlin, and New York, but the cost has increased unexpectedly.

The three-day Icons and Idols: Rock N Roll auction is hosted by private auction house Julien’s Auctions sold Steve’s one more belongings. On Saturday, the sale of cork and jute sandals for $218,750 was reported.

According to Julien’s organizers, Fortune reported, the sandals were only expected to sell for $60,000.

Sold for $218,750. A pair of brown suede leather Birkenstock Arizona sandals that were personally owned and worn by Steve Jobs.

While most vintage items have their prices reduced to account for normal wear and tear, in the case of Jobs’ Birkenstocks, the value was in the damage.

As per their description page on Julien’s website, the Birkenstocks were “well used, but still appear intact.” The sandals footbed retains “the imprint of Steve Jobs” feet, which had been shaped after years of use,” and the rubber soles “show heavy wear from use,” the page also noted.

At critical points along his path to Apple, Jobs practically dug his heels into the sandals. For example, Julien claims that they cupped his feet as he crossed the Los Altos garage. The garage  where he and co-founder Steve Wozniak constructed Apple’s first computer.

Although the hype surrounding Jobs’ Birkenstocks is partly a result of his exalted status in Silicon Valley, the sandals may have sold for more money this time around because Birkenstocks have experienced a dramatic rise in popularity.

Due to TikTok, the Boston clog from Birkenstock. A closed-toe shoe that differs from Jobs’ concept has become increasingly hard to find lately.

In October, the New York Times reported that because the shoe was out of stock online. Dealers were asking double the $160 suggested retail price.

It all seems going in a strange circle because Jobs shared a particular interest in Birkenstock sandals.

According to Margot Fraser, the German-American businesswoman who started the US division of Birkenstocks, “he was interested in where the form comes from. He wanted to know everything about the materials and was also interested in the technical side.”

People started reacting over Steve Jobs’ Birkenstock and its buyer

As soon the post was shared on Twitter people started reacting on it. A person tweeted sarcastically, “Hmm, I have similar looking Birkenstock somewhere in the house, I wonder if I can get at least $200 for them.”

Another person tweeted, “Someone just paid $200,000 for a dirty pair of sandals all because Steve Jobs wore them. You talk about a waste of money. Imagine if that had been given to the poor.”

Someone just paid $200,000 for a dirty pair of sandals all because Steve Jobs wore them. You talk about a waste of money. Imagine if that had been given to the poor.