The former first lady of the United States who is known for her pro-crypto attitude, Melania Trump has successfully sold one of her many NFTs. The digital token, however, was sold to the asset’s founders, according to blockchain data.

Melania Trump has successfully sold one of her many NFTs 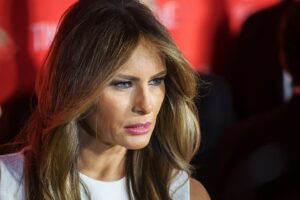 The alleged NFT is from the “Head of State Collection, 2022,” which comprises “three essential one-of-a-kind autographed items” of clothes she wore during French President Emmanuel Macron’s visit to the White House in 2018.

The auction was won by a price of around 1800 SOL, which converts to $170,000, according to the New York Times. The collection was coined on the Solana blockchain and received excellent accolades from the public.

However, an analysis of blockchain data reveals that the account that minted the NFT delivered $473,000 in USDC to an address that later changed some of the funds into 1816 Solana units, which were then sent to another address that eventually won the auction.

The former First Lady’s team did not confirm who purchased the NFT in a statement, instead stating that “the nature of Blockchain technology is totally transparent.”

As a result, each transaction on the blockchain may be viewed by the general public. On behalf of a third-party buyer, the transaction was arranged.”

It’s worth noting that Melania Trump’s NFT trade isn’t her first foray into the crypto world. She was one of several crypto enthusiasts who celebrated Bitcoin’s Genesis Block anniversary when she released an NFT, which is a digital watercolor picture of her own eyes, as we previously reported.

We were unable to determine whether her current endeavors are supported by her husband, Donald Trump, who has been a loud critic of Bitcoin and the crypto business in general. Melania Trump’s and her team’s efforts in the crypto industry are commonly referred to as “wash trading.”

Simply said, wash trading is used to create a false impression about a non-tradable item. In wash trading, the seller and buyer are the same people. To carry off the transaction, the culprits transmit funds to wallets they control, leading the public to believe there is a significant demand for the item.

Wash traders made roughly $9 million from their transactions in 2021, according to a recent CryptoSlate analysis. We demonstrated in another research that over 80percent  of NFT trades on LooksRare were actually washing trades.