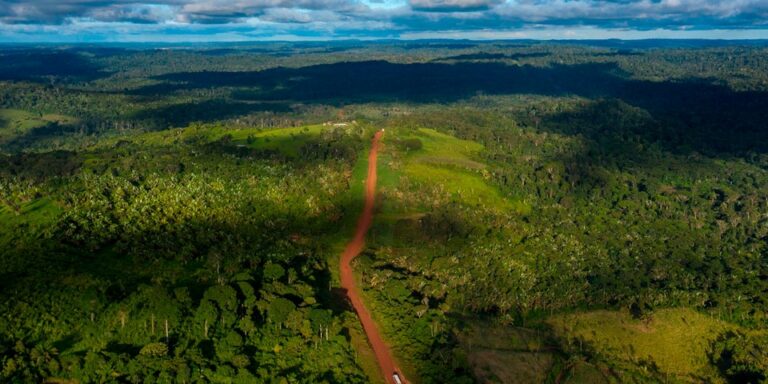 The Amazon Rainforest is in desperate need of assistance. And it’s possible that NFTs will save it. A Brazilian business has purchased large swaths of property in the Amazon and is reselling the land as NFTs.

Moss is a climatic company based in Brazil. They are a company that sells blockchain-based environmental solutions. Until now, they were notorious for selling carbon credits to large corporations (such as airlines) who were destroying the environment.

The airline purchases carbon credits, which Moss offsets by planting trees and restoring the rainforest, thus erasing the damage that polluting industries cause.

According to the company, through internationally approved and audited projects, they have saved about 735 million trees in the Amazon.

They now want to work hard to safeguard the entire Amazon jungle. So they’ve devised a method to accomplish this. They recently purchased a large portion of the Amazon and divided it into hectares.

NFT represents each hectare’s rights, which they are now selling. The Moss Amazon NFT allows everyone with an interest in the Amazon jungle to participate in its preservation.

Moss is hoping that with this new green asset, a vast number of people from all around the world can help them rescue large swaths of rainforest. The tokens were released on the OpenSea platform for a pre-sale round earlier this week. They were sold out in just an hour.

If you don’t want to cry because you missed out, you can sign up to be notified when the next sale is held. On NFT platforms, there are some useless, foolish NFTs. However, this NFT series appears to make up for all of the earlier NFT products’ blunders and embarrassments.

“Own your piece of the Amazon Forest,” says the OpenSea tagline. Everything, including the ground, the trees, and the water. This isn’t just another gaming card or tool for conservation fundraising. There’s none of this ‘purchase this art to save the forest’ nonsense. This NFT serves as a confirmation of real estate ownership.

By purchasing a piece of the Amazon Forest, you are helping to build a ‘Green wall’ of properties dedicated to conservation and acting as a disincentive to destruction. We can prevent deforestation in the Amazon by erecting a 15 million hectare ‘Green Wall,’ according to Moss. This would very certainly cost $10 billion. We’ve found the majority of the acreage required for the “green wall.”

The new owners of the NFTs now have land the size of a football field. They also received an encrypted digital certificate of ownership, which attests to the forested regions’ validity and control. It is believed that by doing so, the area and its peculiarities will become a “collectible” object.

Moss’s CEO is Luis Felipe Adaime. “Our mission is to save the Amazon, and with blockchain technology and innovation, we will enable a growing number of people to participate in this dream.” We began the fight to safeguard this region by purchasing a 50-hectare parcel. One thing is certain: more locations and NFTs will be available in the near future.”

The company behind the NFT token sale has created a 30-year protection fund. The proceeds from the sale of NFTs will cover 20% of the costs of protecting the land. Patrolling, satellite imaging and security will be covered.

Moss was established in the year 2020. Since then, more than $30 million has been donated to conservation programs in the region through their carbon credit token, MCO2. Coinbase, Gate.io, Gemini, and Probit all have the MCO2 cryptocurrency listed. One carbon credit is equal to one MCO2 token. “Amazon NFTs will have their carbon impact calculated and offset by the equivalent MCO2 tokens,” Adaime said.

The ‘Green Wall’ will provide security for Amazon faster as more people buy NFTs. Let’s hope this initiative delivers on its potential.