Tom Brady recently demonstrated his acting abilities by appearing in two advertisements that appeared during the NFL season kickoff two weeks ago. Subway was featured in one TV commercial, while FTX, a cryptocurrency exchange site, was featured in the other.

The seven-time Super Bowl champion was chastised for endorsing a fast-food sandwich company that does not fit into his ultra-strict TB12 diet. Brady, on the other hand, has stated that his support for cryptocurrency is genuine. And, to back up his claim, the NFL superstar is willing to put his money where his mouth is. 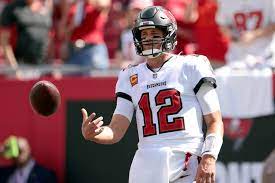 On  SiriusXM podcast Let’s Go, which Brady co-hosts with sportscaster Jim Gray and future Hall-of-Famer Larry Fitzgerald, Tom Brady said that he would love to receive a portion of his NFL paycheck in cryptocurrency, noting that a few players have already requested it that is Brady would love to be paid in crypto.

During his football career, Brady has made more than a quarter-billion dollars in NFL compensation alone. The quarterback is set to earn over $40 million this season from the Tampa Bay Buccaneers and has no intention of slowing down anytime soon, recently declaring that he can probably play until he’s 50.

The Oakland Athletics, Sacramento Kings, and Dallas Mavericks have all accepted Bitcoin as a form of payment for tickets. Spencer Dinwiddie, an NBA point guard, has long been a proponent of Bitcoin. Russell Okung, an NFL offensive lineman, previously stated that he paid half of his 2020 salary in Bitcoin.

This isn’t the first time the American football player has dabbled in the world of cryptocurrencies.

Brady joined the non-fungible token fever in April by launching his own NFT platform, Autograph. He hoped that by initiating the initiative, he would be able to bring together well-known figures from many industries, such as sports, fashion, pop culture, and entertainment, to create personal, one-of-a-kind digital artworks. Tiger Woods, Tony Hawk, and Naomi Osaka have all joined the site, indicating that his concept is a success.

Soon after, the quarterback redoubled his efforts in the cryptocurrency space, he and his wife, Gisele Bündchen, have invested in the FTX digital asset trading platform. As a result, the duo will act as exchange ambassadors and will be compensated in cryptocurrency.