Amongst the major companies who are now trying to make it to the electric vehicle (EV) is Toyota. The company has decided to introduce first SUV (Sport Utility Vehicle) which is built on a new EV platform. The company has now joined in this competition along with auto giant Volkswagen.

Toyota is considered as the world’s largest car maker. The company has decided to preview its ‘bZ4X’ which is an electric Sport Utility Vehicle (SUV). The car was previewed at the Shanghai Auto Show 2021 on its new ‘e-TNGA’ platform. The ‘bZ’ in ‘bZ4X’ stands for beyond zero or a car which gives out zero emissions, as per the company Toyota.

Tatsuo Yoshida, a Bloomberg Intelligence analyst said, “Toyota isn’t behind Volkswagen and others when it comes to EV development, it just hasn’t been as vocal as others. The ambitious announcement for new models was a surprise, but it was just Toyota finally revealing what it’s been working on for some time.” 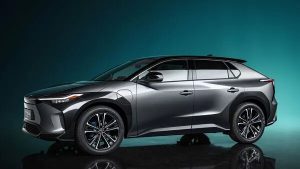 This electric vehicle is a compact SUV. This model looks similar to the Rav-4 which is a popular model from Toyota. This vehicle is equipped with a system which can recharge the cars battery using solar power. This car is built on an entirely new platform and instead of traditional steering wheel; this car features a distinctive yoke.

Toyota plans on introducing 15 new electric vehicles by the year 2025. And by mid 2022 the company plans to produce ‘bZ4X’ models in Japan and China and sell it worldwide. According to Masahiko Maeda the chief technology officer at Toyota, the company is also planning to introduce seven new ‘bZ’ series globally.

This platform can be fitted into a broad range of vehicle sizes. This will allow the most expensive parts of the electric vehicles such as the battery and the motor to be adjusted based on the model. However it will not be able to change certain key elements of the model.

The e-TNGA platform by Toyota is similar to the Volkswagen MEB car platform. The MEB car platform is used by Volkswagen and its subsidiaries in order to develop electric cars. With the help of this platform, Toyota will be able to develop electric vehicles of different sizes and with different prices. It will be helpful for the company to gain a younger consumer base.