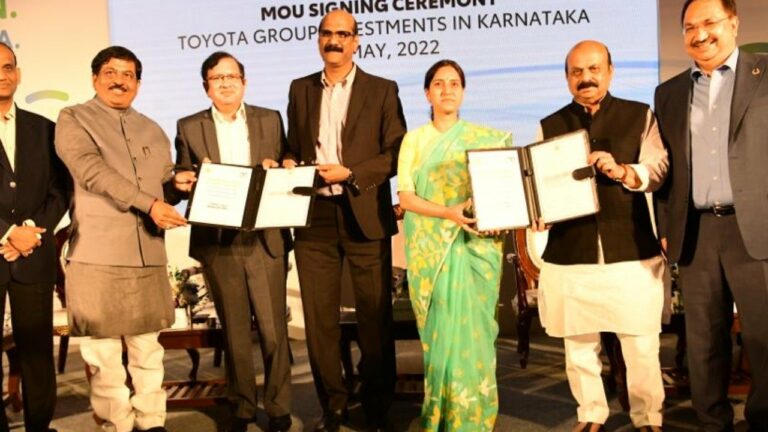 Toyota to get additional investment of 4800Cr from Karnataka govt. The investment is to promote greener technologies and for the manufacturing on EVs

The Toyota Group signed a Memorandum with the Karnataka Government to get additional investment. It is around Rs. 4,800 crore investment to cater the EV manufacturing in India and also promote greener technologies. This is also expected to create more jobs. The Group includes Toyota Kirloskar Auto Parts and Toyota Kirloskar Motor (TKM).

“As the supply chain system builds, we expect much more to come in later,” he said. The Japanese automaker will use its existing facilities in Karnataka to produce the components, Gulati said. The investment is aligned with Toyota’s green targets and will help in reducing dependence on fossil fuels and mitigating carbon emissions.
According to Kirloskar, Toyota aims to lower carbon emissions in a holistic manner and not just focus on tailpipe emissions. The company plans to address manufacturing and lifecycle carbon emissions as part of its aim to become carbon neutral by 2050.
Meanwhile, the investment is also aligned with India’s ambition of becoming a self-reliant manufacturing hub. While the Indian government has been pushing for EV adoption, it is lagging behind countries such as China and the US mostly because of a lack of infrastructure. According to Crisil forecast, Indian automakers could generate $20 billion in revenue from electric vehicles between the now and fiscal year 2026. By the year 2040, 53 percent of new automobile sales in the country will be electric, Bloomberg reported. “Toyota is committed to enhancing the pace of electrification and strengthening domestic production with ‘Make in India’. Today’s MoU signing is a very important milestone in terms of ushering in large-scale investment to make deeper cuts in carbon emissions, and higher employment generation.” said Kirloskar.