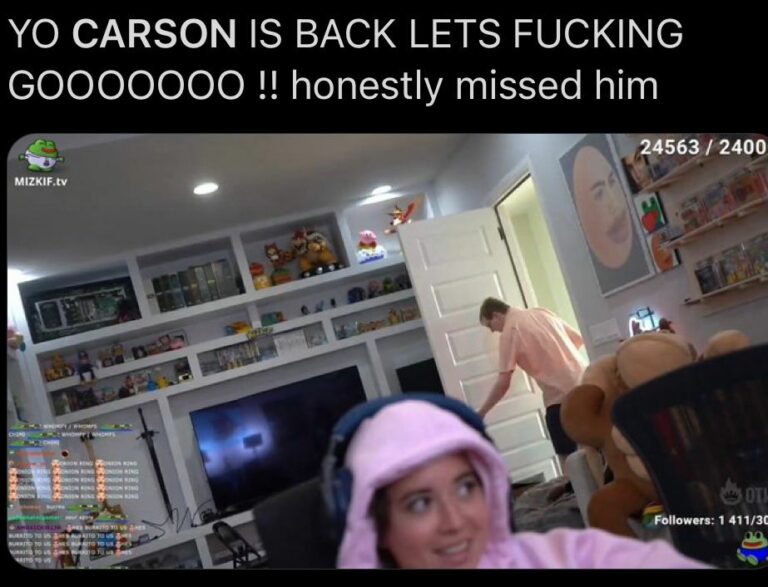 Twitter indulges in a fair amount of wondering and guessing every now and then. The slightest probe can start a firework of guesswork and speculations which eventually culminate in memes and more memes. And today the point of focus for all the frenzied discussions and memes is a person who was literally out of focus in the picture. Yes, we are talking about Carson King, the gamer and YouTuber who made news for all the wrong reasons not so long ago. If the name Carson King does not ring a bell, CallMeCarson might help jog your memory. Carson who was MIA for quite a while was spotted in the backdrop of a streaming session for a fleeting moment and that flared up Twitterati’s interest. Questions of whether Carson is back or if he is Carson at all started coming from all directions. And soon enough, Twitter’s trending list got another name to add to it.

Although Carson was quite popular with a strong fanbase. However things went downhill as accusations against him surfaced for sexting his fans, all of them underage. He supposedly vanished from the gaming domain in January following the accusations and now it seems like he has decided to come out from under the rock. What was more disturbing about the accusations was the fact that a good majority of Carson’s followers were children. However, despite the sensitivity of the case, there were many who took the gamer’s side, stressing that the whole affair was a clear case of manipulation and not pedophilia. Some also pointed out his mental health problems to blunt the sharpness of the anger that was directed at him following the news. And today, with his random spotting, Twitter has once again engaged in a Carson-based discussion, complete with memes and jokes. Let us take a look.

“if ur a carson anti ur soft. take an L” pic.twitter.com/BRubRfDVSp

I guess carson is back? I'll drop this if someone forgot 💀 pic.twitter.com/WtpRYpLbLm

searching up 'carson' and seeing everyone get mad over the dumbest shit is so fucking funny pic.twitter.com/qqLQGkmiSU

Too tongue-tied for comments.

I will happily look at the dog.

cmc Carson Mizkif
Now that y’all are here look at this dog I got in my room pic.twitter.com/mB3L6AIbCA

// cmc, callmecarson
Sorry to ruin your day, but Carson literally came on Mizkif’s stream, acted like nothing happened, said “love you Twitter” and then left. Can’t believe people still support that man after all the shit that has come out. Reminder that he is a groomer…