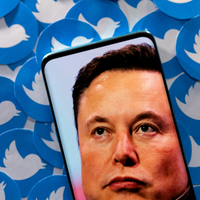 Twitter should be even-handed: Elon Musk on election concerns

Elon Musk, the new owner of Twitter, stated that the social media platform “should be even-handed, favoring neither side” during elections.

Musk said he would look into it in response to a tweet that claimed election restrictions have returned to the platforms after a ballot harvesting report was labeled “unsafe” by Twitter ahead of the US midterm elections.

The deadline for the midterm elections is November 8, 2022.

The Twitter takeover by Elon Musk has garnered attention on a global scale. On October 27, 2022, one day before the deadline, Musk is said to have completed the transaction by purchasing Twitter for $44 billion.

While some people were ecstatic about the news, most disapproved of Musk’s takeover. Upper management at Twitter was also involved.

What comes next for the dominant social media platform has also been discussed. People want to know what changes Elon Musk has in mind for Twitter.

Elon Musk thinks to make some changes on platform

Musk is also receiving recommendations from Twitter users on improving the platform. However, Elon Musk has already started changing the social media platform. First, he began removing employees from the top management, and now he has decided to make the platform even-handed.

A Twitter user questioned Musk about the likelihood of increasing the maximum video length so that users may post lengthier movies. Musk responded to the idea by tweeting, “100%.”

On Twitter, a different person asked Musk for several game modes. Something along these lines,” Musk said in response to the tweet.

Other users also offered advice, including proposals to eliminate or increase character limitations. Musk also responded to another user, saying that anyone suspended from Twitter for insignificant reasons will be let out of Twitter jail.

Fitton tasked Musk to investigate how it was influencing elections on the left. Musk promised to check into this in his response to the tweet. He further stated that Twitter ought to be impartial, supporting neither side.