Employees at Uber have been rattled by the recent groundbreaking news that Uber has slipped behind DoorDash in market value. According to sources familiar with the situation, the main question at the company’s next all-hands meeting will be how this happened and how it can respond. 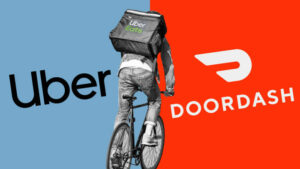 The other week, DoorDash’s closing valuation surpassed Uber’s, with the food delivery firm valued at $75.2 billion vs $74.9 billion for the delivery and ride hailing service. This maintained a months-long pattern of investor scepticism about Uber’s ability to swiftly resurrect its ride-hailing business in the face of a persistent pandemic.

Meanwhile, bullish Wall Street analysts have backed DoorDash, citing the company’s high market position in the United States and ability to grow into other areas such as supermarket convenience store delivery. The company’s stock has increased by nearly 70% in the last six months: Uber’s stock is down over 30%.

Uber has an all-hands is scheduled for Tuesday. Employees can submit questions in advance and vote on which ones should be addressed by management. The topic of DoorDash vs. Uber value was voted to the top of the agenda for this meeting.

Emil Michael, the company’s former Chief Business Officer and a vocal critic of CEO Dara Khosrowshahi, said last week that DoorDash surpassing Uber’s valuation was a “nightmare.” In 2018, the company’s food-delivery business was four times that of DoorDash, he said. The inference was that the present administration was to responsible for the loss of that advantage.

On the surface, it seems paradoxical that Uber, which provides both ride-hailing and food delivery services, would be valued less than DoorDash, which solely does food delivery. The fact that Uber’s food-delivery company covers the world, with interests in foreign players such as Zomato in India, is also significant. Uber’s delivery arm made $1.9 billion in sales last quarter, compared to $1.2 billion for DoorDash. Uber’s mobility segment made $1.6 billion in revenue.

DoorDash generated $113 million in adjusted earnings before interest, taxes, depreciation, and amortisation in the previous quarter. Uber’s delivery segment had an adjusted EBITDA loss of $161 million.

The disparity between the two firms is most visible in the United States, where Uber and DoorDash compete head-to-head. Uber, despite its early advantage, has now fallen well behind. According to Bloomberg Second Measure, DoorDash had 57 percent of the US food-delivery market in July, while Uber had 26 percent. According to current and former workers, Uber Eats was overtaken and thwarted by DoorDash, which took a more aggressive approach to signing up eateries, between 2018 and today.