Squid Game (SQUID), a new cryptocurrency inspired by the Netflix program of the same name, has grown by 45,000 percent in just a few days after its launch earlier this week, however, several investors of Squid game Cryptocurrency are unable to sell the token.

“We’ve received many reports that PancakeSwap users are unable to sell this token. In a warning about the SQUID coin on its website, the leading crypto tracking website CoinMarketCap stated, “Please use caution while dealing”. 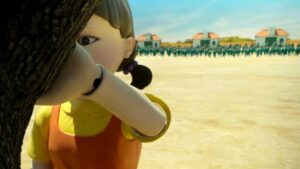 At the time of writing, CMC claims that PancakeSwap is the only exchange for exchanging SQUID. With a daily trading volume of $7 million, the token is trading at $5.71 and is one of the top gainers on CMC.

SQUID’s meteoric rise, combined with allegations of the token’s incapacity to be sold, has prompted some crypto aficionados to speculate that the new coin is a Ponzi scheme.

Some critics have pointed out flaws in the white paper for the Squid Game token, such as poor syntax, spelling problems, and assertions that are “difficult to verify.” The Squid Game token’s website has a trust score of 45 out of 100, according to prominent scam-checking site Scamadviser.

The Squid Game token is based on Netflix’s namesake show, in which players risk their lives to play hazardous games in the hopes of winning a large sum of money. The token is believed to allow players to compete in six online games for a chance to win cash prizes.

Due to SQUID holdings requirements, CMC made a statement on Friday stating that due to SQUID’s rally, playing the Squid Game detailed in the project’s white paper may be costly for most participants. As a result, players in the sixth and final game would need to have 15,000 SQUID, which is worth approximately $80,000 at the time of writing.

CoinGecko, CMC’s main competitor, has steered clear of SQUID. “Because this cryptocurrency does not match our listing standards, CoinGecko will not list it.  It’s most likely a scam, said Bobby Ong, co-founder of CoinGecko. He further clarified that CoinGecko is not a partner of the Squid Game token, as stated on its website: “This is false, and we are neither a partner nor linked with Squid Game”.

The only thing the white paper says about Marbles is that “obtaining Marbles without committing violence is the secret to Squid Game.”

“SQUID liquidity will be locked on DxSale for three years, preventing any unexpected and quick changes to the SQUID liquidity pool.” The white paper further states that the unlock date is October 20th, 2024.

Also read: Jim Cramer invests in Crypto because ‘There could be millions of greater fools out there’