Vitalik conducts a Twitter poll asking which currency will they prefer over Ethereum. His tweet asked, let’s say you wake up in 2035 and see 80% of the world’s transactions and saving happening in a currency, and it’s not ETH. Which one will you prefer it to be? Vitalik did two polls, one with popular options like Bitcoin, Cardano, Solana, and USD. The second one had Tron, Binance Coin, CNY, and NEO as the options. 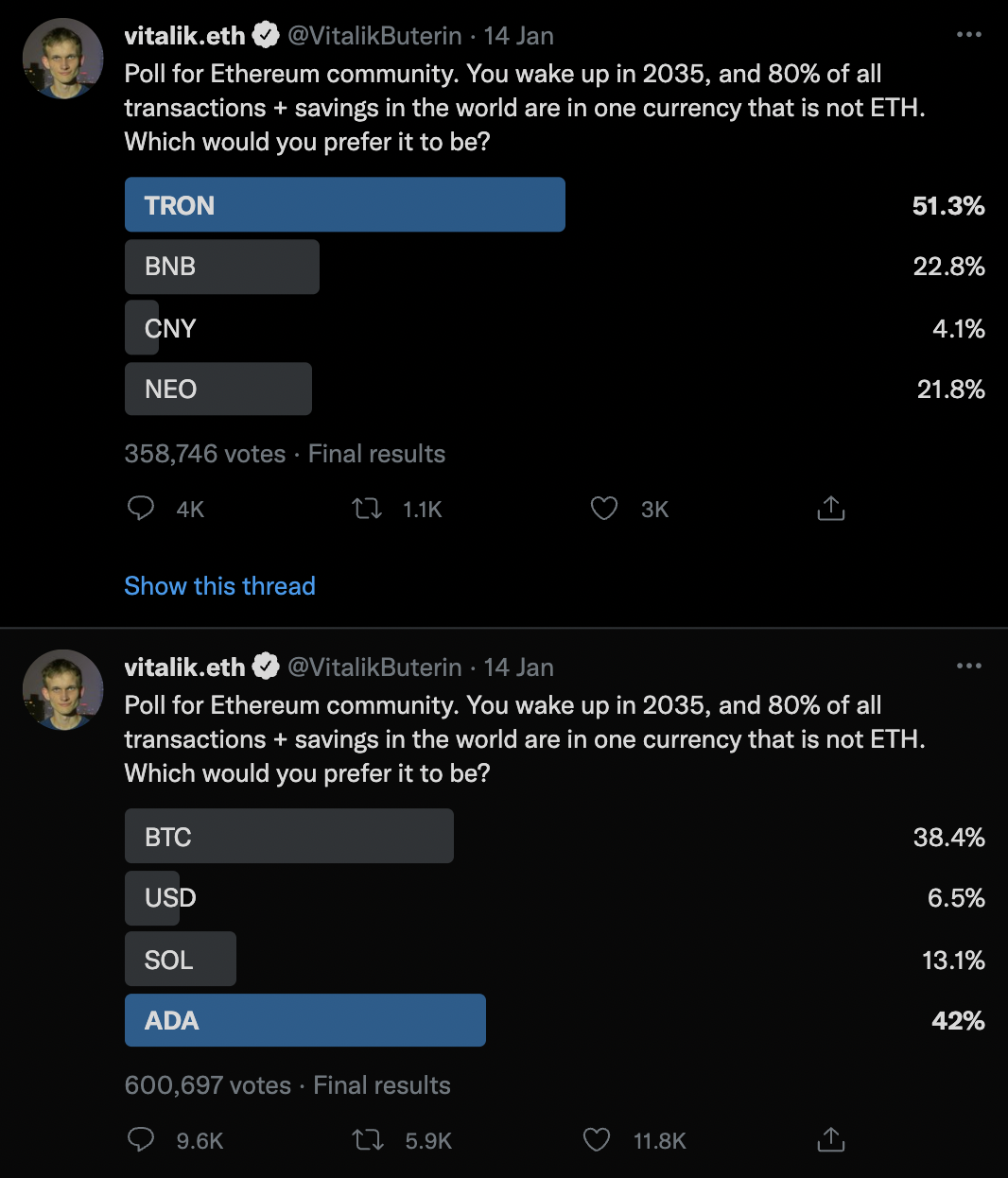 In the one that included the more popular cryptocurrencies, the highest votes went to ADA, which was not as expected. But, in the first 14-16 hours of the vote, BTC was actually leading, but slowly ADA overtook it with 42% votes. But still, BTC came a close second with 38.4% votes which shows you cannot completely rule it out. Despite the repeated delays and poor price action, ADA still has a very strong community and believers out there. Solana got only 13.1% of the total votes, and this can be attributed to the reason that SOL is too centralized for many people. And I am pretty sure no one would like a crypto whose network goes down thrice in 6 months. Finally, we had the fiat USD that received 6.5% votes.

Coming to the 2nd poll that features less popular cryptocurrencies included TRON, BNB, CNY, and NEO. In this, the winner was TRON, with 51.3% of the total votes. TRON is one of the most used networks due to its cheap cost and relatively fast speeds. Then we had BNB that got 22.8% votes and NEO with 21.8% votes. The last was obviously then fiat currency CNY with 4.1% votes.

Do note that the first poll received almost twice the total votes of the 2nd poll, which makes it even better. The first one had 600,697 votes, and the second had 358,746 votes in total.

Bitcoin comes a close second. How?

What are your thoughts as Vitalik conducts a Twitter poll and ADA wins the same? Which crypto did you vote for? Let us know in the comments below. Also, if you found our content informative, do like and share it with your friends.

Also Read: Mark Cuban says 80% of his new investments are in crypto.