Volkswagen CEO Herbert Deiss opened his Twitter account in December 2020. But after being inactive for a month, he made his Twitter debut on Wednesday with a friendly jibe at his professional rival, Tesla CEO, Elon Musk.

Debuting with a Bang –

In his very first tweet, the German CEO warned his Tesla Counterpart that they were coming after Tesla’s market share. Mr. Diess also reminded the world’s newly-crowned richest person that Volkswagen was already influencing the European market for electric vehicles.

Since 2018, after being named the Volkswagen CEO, Herbert Diess has been making some serious efforts to capture the electric vehicle market, which is largely dominated by Elon Musk’s Tesla. Electric car manufacturer Tesla is one the most valuable automobile company.  Tesla’s CEO and founder, Elon Musk, has recently surpassed Amazon boss Jeff Bezos to claim the world’s richest person title.

Hello @Twitter! I’m here to make an impact with @VWGroup, especially on political issues. And, of course, to get some of your market shares, @elonmusk – after all, our ID.3 and e-tron have won the first markets in Europe. Looking forward to productive discussions!

Mr. Diess was probably referring to the success which Volkswagen Group and Audi brand witnessed in its first mass-market electric vehicle in Europe.

The tweet by Volkswagen CEO Herbert Deiss is being loved by the users and has several retweets. Here are some of the interesting responses –

The future belongs to the company with the best software and product experience. It’s no longer about who can make X amount of cars. Invest heavily into both of these and VW will do just fine. Put aside short term profitability and learn to play the long game.

Great to see you here. Congrats on your success in the EU. Looking forward to updates on China/USA. There’s a lot of misconceptions out there. Apparently, your going bankrupt soon, and a “dinosaur”.

As competitive as they both might seem, if you have followed their journey, you would know that both Elon Musk and Herbert Diess share a good relationship. In 2019, Elon Musk applauded Diess’ efforts and wrote on Twitter that the Volkswagen CEO was “doing more than any big carmaker to go electric.”

Herbert Diess is doing more than any big carmaker to go electric. The good of the world should come first. For what it’s worth, he has my support.

Herbert Diess has often praised Elon Musk for his out of the box solutions and doing things people thought is impossible. Last year, the German CEO wrote on LinkedIn praising Tesla CEO,

So, yes, that’s what a healthy friendship looks like. There’s respect, rivalry, and the efforts to be the best! It’s great to see two of the world’s most influential CEOs giving us friendship goals. 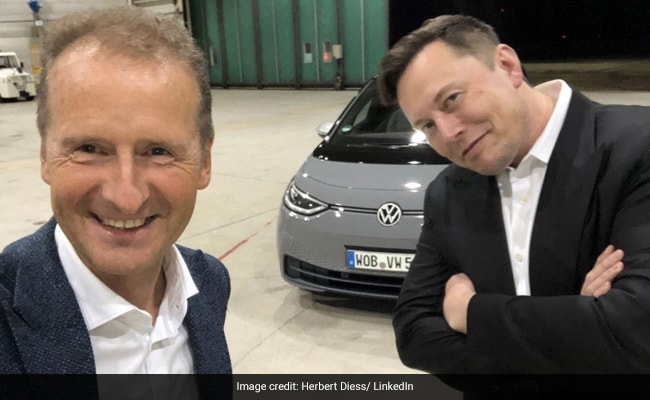 Elon Musk recently announced he would donate $100 Million to the best Carbon-Capture Technology on the microblogging platform, Twitter. Musk’s Tesla has finally entered the Indian market. The US electric car giant has registered its Indian subsidiary in Bengaluru, India.