Virtual Reality (VR) has been able to give its users an experience like no other. It is capable of providing a fully immersive experience by creating the scenario in from of us. This is however possible only if one has access to the VR headset. The users are also able to interact with the 3D images being presented on the screen.

Virtual Reality (VR) has now been incorporated by the Egyptology experts at the University of California Berkeley to provide an experience of the Egyptian tombs. These experts have created “The Book of the Dead in 3D” by utilizing virtual reality technique in order to provide the users with an opportunity to witness an Egyptian burial site.

Rita Lucarelli, the project lead and an associate professor of Near Eastern Studies and faculty curator of Egyptology at the Hearst Museum at UC Berkeley said, “You can have the experience of entering a tomb, walking around a coffin and interacting with these beautiful funerary texts and images.” 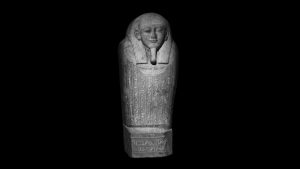 “The Book of the Dead in 3D” program will allow the users to explore tomb of an ancient Egyptian called “the Doctor”. The VR will transport the users to the grave which is hidden beneath the pyramids and will offer the first person point of view of this burial site. This technology has allowed the experts to recreate the artifacts in an up close perspective. This will also provide the users to understand the ancient Egyptian traditions surrounding the deities and their practices regarding after life.

Lucarelli and her team has successfully scanned, digitized and prepared 3D models of the Egyptian artifacts. This was done in order to preserve these artifacts in digital format so that they will be available for studying and research.

A lot of historical artifacts are accessed with the help of technology now a days. A similar example was seen at the Netherlands. A new x ray method helps the researchers to digitally “unfold” locked letters from the Renaissance period. These have been locked in a trunk since the seventeenth century.

In order to access these letters the researchers utilized an X ray microtomography scanner made at the dental research labs at the Queen Mary University of London (QMU). This scanner was designed to be very sensitive as it was made to map the mineral content of the teeth. But as a by product of this device, due to its highly sensitive nature it can now access and analyze certain type of ink in paper or parchment.

Following the scan, the team was able to build the digital 3D reconstructions of the letters. They then went on to create an algorithm that was able to decipher the sophisticated folding techniques, opening the letters virtually. According to the study since the letters are opened virtually the algorithm also preserves the letter locking evidence. So far the scientists have been able to digitally open four letters using this technology.