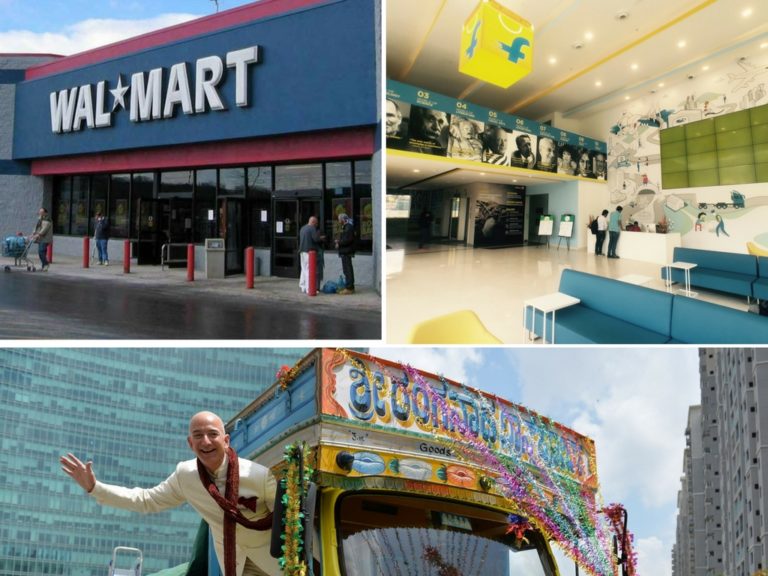 Will Walmart’s Speculative Investment Act As A Powerful Armor In The Battle Between Flipkart And Amazon India? 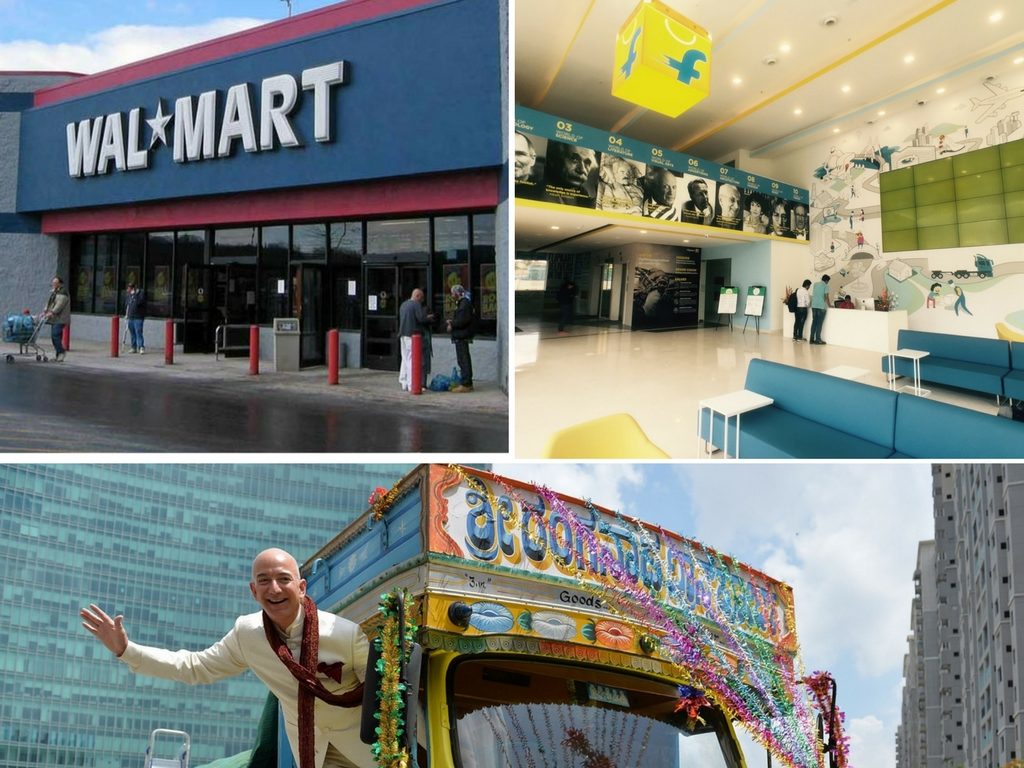 The feud between the two most prominent enemies, Flipkart and Amazon India, has been in talks from quite a long time now. The hearsay of Walmart making an investment in Flipkart has added an altogether new backdrop to the play.

Before analyzing the impact of this investment (if made), let us have a sound understanding about all these three giants in the world of Corporate market.

Flipkart, an Indian Startup founded in the year 2007 by two graduates of IIT Delhi, Sachin Bansal and Binny Bansal, is one of the most prominent players in the Indian e-commerce market. Headquartered in Bangalore, India, the company’s expedition of the Indian marketplace began by selling books in the first place. Right after examining and canvassing the market, Flipkart amplified its operational activities and is presently a hub for almost all varieties of products, right from electronics to books to clothing.

In the course of its dream to sit on the iron-throne of the Indian e-commerce market, Flipkart participated in the acquisition of several companies which are now backing up the company. Some of the most profitable and utile acquisitions were- Myntra.com in the year 2014, Jabong in the year 2016, PhonePe in the year 2016 and many more.

Amazon, an American company, founded in the year 1994 by Jeff Bezos, is headquartered in Seattle, Washington. The company started constructing its boulevard in the Indian market in the year 2012 when it launched the site- Junglee.com. The activity of this site was limited to comparing prices. It was in the year 2013 when Amazon launched its site- Amazon.in for sale of books, movies and television shows.

There is an endless list of acquisitions made by Amazon even before it was introduced in the Indian marketplace. Some of its famous acquisitions were that of- Goodreads, Twitch, etc.

Walmart is an American multinational retail corporation which routes its origin in the year 1962. A company founded by Sam Walton back then is today the world’s largest company in terms of revenue. Walmart is not just a brand, it has reached the pinnacle of all the brands because of its products and services.

Walmart took its footsteps in India in the year 2007. The governmental laws of India do not allow 100% Foreign Direct Investment in the retail sector and so it has since been struggling in the Indian market. Walmart is presently running about 21 wholesale business stores in India.

Overview of Flipkart’s funding till date

The company was able to complete its Series H round of funding in the year 2014 from SteadView Capital- a whopping INR 700 Million.

Now in the year 2016, it is speculated that Walmart is going to invest a whacking 1 Billion. This investment might add some new tales to the Indian e-commerce market.

Impact of the investment

Joining hands with your enemy’s enemy helps you defeat your enemy. This is the exact strategy followed by Walmart. The war between Walmart and Amazon is known to all and so is the case with Amazon and Flipkart.

But we need to ask ourselves a question- Is defeating Amazon the sole purpose of Walmart making an investment in Flipkart? The answer to this question lies in the following section.

Walmart entered the Indian market in the year 2007 and since then this MNC has been struggling and clambering due to the governmental laws with respect to FDI in retail sector. Back in 2011, there were tons of arguments and debates for allowing 100% FDI in retail sector. But irrespective of all the debates and arguments, the Indian government has not yet allowed a 100% FDI.

Walmart presently holds 21 wholesale business stores in India. The biggest backlog for Walmart is that it is still unable to sell products directly to the customers.

The minority stake in Flipkart can entirely change the scenario of Walmart in the Indian market and gear it up against Amazon.

Flipkart and Amazon have been the two most prominent contenders in the race of Indian e-commerce market. While Amazon has been fueling its base in India by huge funding, Flipkart has been struggling with minuscule funds. At the time when it is difficult for Flipkart to raise funds by way of Venture Capital, this investment could prove to be a live savior for the company.

Amazon.in(India) has always been backed up by Amazon.com by way of huge investments.  A whopping 3 billions has been invested by Jeff Bezos this year. So, will an investment of 1 billion really affect Amazon ?

There are mixed answers to this question. We need to understand one thing here. Funding and Strategising are strings of the same Guitar. Strategies backed up by sufficient funds or funds backed up by sound strategies, both leads a firm to the path of success.

Now both the companies have got enough funds for their operations (Flipkart being on a lower end). It is now a game of startegies and plans. Whoever has a better strategy or a plan gets to sit on the iron throne.