Following a bogus news release put out by GlobeNewswire that touted a relationship with Walmart, the cryptocurrency litecoin gave up a 20% gain and fell down to earth. 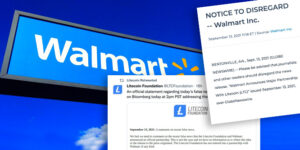 Randy Hargrove, a spokesman for Walmart, verified that the news release is fake. He also stated the organisation has been in touch with the newswire company to determine how the bogus press release got uploaded.

Intrado, a telecommunications corporation, owns GlobeNewswire. At 11:18 a.m. EST, it issued a “notice to disregard” the initial release.

The announcement was covered by a variety of media outlets, including CNBC. Walmart’s stock fluctuated a tiny bit. According to Coin Metrics, Litecoin was down roughly 2.2 per cent at the time of writing.

The release was issued using a fictitious user account, according to GlobeNewswire.

“This has never happened before, and we have already implemented strengthened authentication measures to prevent this rare occurrence from happening again,” a representative said. “We will work with the appropriate authorities to request – and support – a thorough inquiry into this occurrence, which will include any criminal activity.”

At 9:50 a.m. ET, Litecoin issued a news release via its official account. One of Litecoin’s social media team employees “was a little too excited and tweeted the storey from the Litecoin Twitter account” in response to the numerous media outlets that covered it, the Litecoin Foundation said in a statement Monday afternoon. “We swiftly removed this, and we’ve taken efforts to prevent future problems.”

An official statement regarding today's false news – Charlie Lee will be live on Bloomberg today at 2pm PST addressing the subject. pic.twitter.com/x7z7NZ02nZ

The Securities and Exchange Commission has stated that it will not comment on such issues.

According to the press release, Walmart, the country’s largest retailer, will accept cryptocurrency payments from litecoin users. It mentioned a broken website in the email of one of the listed contacts, which raised suspicions.

The press release was never posted on Walmart’s official corporate website and has since been taken down from GlobeNewswire.

For those who don’t know, Litecoin is peer-to-peer Internet money that allows for near-instant and low-cost payments to anyone on the globe. Litecoin is an open-source worldwide payment network with no central authorities. Math secures the network while enabling individuals to control their own finances. In terms of transaction confirmation speed and storage efficiency, Litecoin exceeds the leading math-based money. Litecoin is a well-established form of payment that works in tandem with Bitcoin, boasting strong industry support, trade volume, and liquidity.

What is your say about this bizarre incident? Let us know in the comment section below.