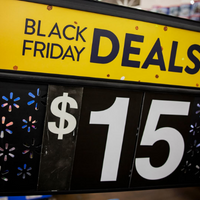 According to a recent study, Walmart is the retailer that holiday consumers think of first when looking for Black Friday offers.

As of Friday morning, the big box retailer dominated internet searches for Black Friday deals. According to advertising technology firm Captify, which monitors more than 1 billion searches every day from websites worldwide.

Walmart saw a 386% increase in Black Friday searches year over year. It was overtaking rival shop Amazon, which had previously scored #1 in Captify’s poll of the most popular retailers on Black Friday. The biggest online retailer in the world came in at number four this year, trailing only Target and Kohls.

While the holiday shopping season is anticipated to be more subdued than in years past, retailers are vying for consumers’ attention and cash. This year, Americans are anticipated to cut back on their holiday buying as extremely high inflation limits their purchasing power.

According to the National Retail Federation, holiday sales in November and December are projected to increase. It can increase by 6% to 8% over the previous year, representing a decrease when inflation is taken into account. According to Adobe Analytics, online sales for the months of November and December are expected to expand by a pitiful 2.5% to $209.7 billion, down from an 8.6% gain in 2017.

The season may not be as bleak as predicted, according to early indications. According to Adobe Analytics, online sales increased 2.9% year over year to $5.29 billion on Thanksgiving Day. That is marginally higher than their projections for holiday season growth.

According to Adobe, Black Friday is anticipated to generate $9 billion in online sales. In addition, it will result in an increase of 1% from the prior year.

The holiday season got off to a strong start for Shopify retailers. According to Shopify, companies hosting their online storefronts made $1.52 million each minute on Thanksgiving.

After the Thanksgiving turkey was finished, it was anticipated that a record number of people would shop on Black Friday. On what has historically been the busiest shopping day of the year. However, there were only sparse crowds outside of stores because of the bad weather.

According to Jimena Silva, a Target employee in Raleigh, North Carolina, which saw severe rain between 6 am and 8 am on Friday, “only about 20 individuals have come through self-checkout, so far.”

According to the National Retail Federation, 166.3 million people are expected to shop from Thanksgiving Day through Cyber Monday this year, which is roughly 8 million higher than in 2017.

However, certain regions of the country had occasional rain, which made Black Friday morning less crowded in stores than normal.