With a $170 billion loss, Tencent is the world’s worst stock bet Beijing tightens the reins on businesses, claiming national security and antitrust concerns.

Tencent Holdings Ltd. has gone from being a market favourite to the world’s greatest stock loser this month as a result of China’s extraordinary crackdown on its technology industry. As of Wednesday, lost almost $170 billion in market value.

From after-school tutoring to music streaming apps, retail to bike-sharing, a slew of high-profile businesses have been impacted as Beijing tightens the reins on businesses, claiming national security and antitrust concerns.

Tencent has faced penalties such as the loss of exclusive music streaming rights and antitrust fines as a result of the regulatory storm.

This week, the company announced that new user registration for its popular WeChat services had been suspended, and that it had been forced to resolve mobile app-related concerns. Tencent’s shares rebounded by 7.1% on Thursday morning. 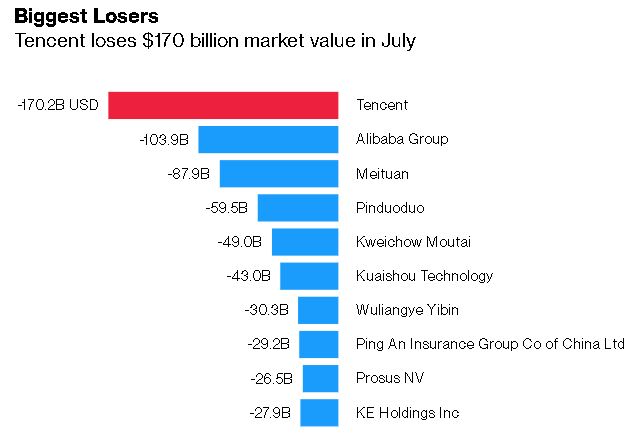 According to Bloomberg data, this is the quickest evaporation of shareholder capital in the globe over this time period. Chinese companies, notably Meituan and Alibaba Group Holding Ltd, account for nine of the top ten losers in shareholder value this month.

“I don’t see an end to the regulatory crackdown. Data security is a top priority to policy makers in the coming years. It’s a new normal,” said Paul Pong, managing director at Pegasus Fund Managers Ltd. “Valuations will have to be adjusted to cope with that, especially for technology giants like Tencent.” 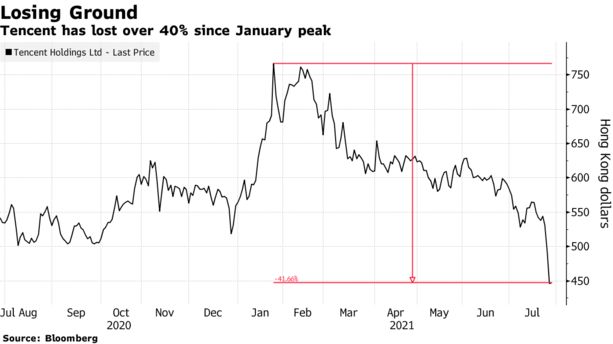 Despite fears of more regulatory action, the company’s stock is starting to look cheap, and most analysts have refrained from lowering their price targets: Tencent is still recommended as a “buy” by 62 of the 68 analysts who have a rating on the company. Analysts’ average target price is HK$736.3, which is a 65 percent premium to Wednesday’s finish of HK$447.2.