World’s 16th Best Selling Car in 2020, Tesla Model 3 A Battery electric vehicle made it to the top selling car list in the world.

In 2020 every company in the car-making business experienced a new low with their sales. Most sales in 2020 came in Q4, and Tesla Model 3 made it into the top 20 best-selling cars list. 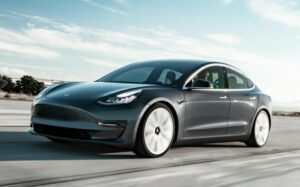 According to the reports, 439,000 Model 3 units were sold all over the world. As the battery electric vehicle was launched only three years ago, it defeated most of its fuel powered cars. This report is according to Focus2move as published by Forbes.

Some of the reasons why Tesla Model 3 is highly preferred is safety, speed at an affordable price and the 5 seater space. Perfect for regular drivers like families or working people.

And depending on the preference and affordability people can opt the autopilot option. Or else just use the car as a regular electric vehicle.

Furthermore, it is a simple car yet has quality. Though it is not available in many countries, the Model 3 seems to be selling more as the company keeps expanding.

By 2020, the Model 3 was known as bestselling EV in the world. And has been best selling plug in for 3 consecutive years in the US.

Though in 2021 the Model Y, the latest model seems to take over the sales. The demand of Model 3 is still continuing because of its affordability.

Back in 2016 when Tesla first starting taking booking for Model 3. Then there were 325,000 reservations made.

Being a 14 year old company, Tesla isn’t just competing other car companies. But actually setting up the future trends.

In the past year, most countries around the world saw the need to shift to electric vehicles. Considering the pollution and other environmental impacts raising day by day. Also, the increases prices of fuels like petrol, gas and diesel is pushing the governments to take innovative initiatives.

In the middle of the increasing demand, Tesla Model 3 being a mid sized sedan stole the spotlight.  Interectingly they don’t have a special PR team or advertising. Except for the special handling team in China majority focusing on eradicating false claims about Tesla. Which was formed only a few months back.

Tesla most latest car released is Tesla Model S Plaid.  As they keep bring in new models, Futuristic yet simple technology involved is pushing other companies to move forward.  Ford is one such fuel based car existing for decades, which is Ramping up it’s EV production line.

The 2021 best selling vehicle list would be interesting and Tesla now has some strong competition.