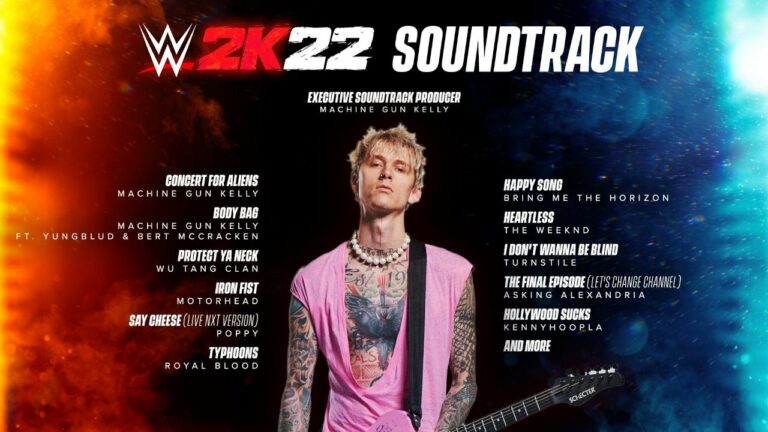 WWE 2K22 Will Get Machine Gun Kelly As Playable Character

Also, MGK is the executive producer of the WWE 2K22 soundtrack, so it makes sense to include it in WWE 2K22 as well. Many fans have been very impressed with MGK’s time in WWE and his prowess in the ring even after such a short time, and this year he also made an appearance at the Royal Rumble. His inclusion in the game is not the first time the celebrity has appeared as a playable character in a WWE video game.

Machine Gun Kelly will also appear in WWE 2K22 commercials to help promote WWE 2K22 with wrestlers such as The Undertaker. A release date for WWE 2K22 is just around the corner, and while WWE 2K22 has yet to be released, 2K Sports has reported that some DLC fans are looking forward to post-release. For starters, there will be the WWE 2K22 Season Pass, which includes the WWE 2K22 DLC pack. 2K’s last release, WWE 2K20, has been called the most disastrous release in 2K Sports history, but hopefully, that will change on March 11, 2022, the game’s launch day.

Playlists for the game will be available on PlayStation 4 and 5, as well as Xbox One and Series S. You can watch the soundtrack trailer below and pre-order the latest WWE video game here. The WWE 2K22 tracklist is also released ahead of the official release of WWE 2K22 on March 11, 2022. In this regard, the return of the MyGM mode in WWE 2K22, which will allow players to create their own superstar roster and manage weekly shows like a true WWE boss, has been scrutinized by WWE 2K22.

Two of his songs will join ten other tracks along with the usual series of wrestler-themed music on the game’s official soundtrack. The game’s soundtrack includes songs from the Wu-Tang Clan, Motorhead, WWE favorite Poppy, and the rapper himself. The 12-track soundtrack is the perfect complement to this edition’s enhanced gameplay,” said Lauri.

We’ve seen curiosity in the past, especially with Fortnite removing several franchises from left fields, like Alien and even Naruto. Regardless, WWE video game lists rarely include cameos who aren’t actual wrestlers, so it’ll be interesting to see who else makes the list. It’s unclear if the character will be a free or paid expansion, but he will be introduced as DLC at a later date in WWE 2K22.