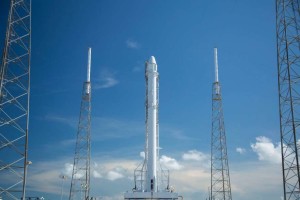 SpaceX Falcon rocket stands at its launch pad at Cape Canaveral, Fla. The unmanned rocket is scheduled to blast off at 12:45 a.m. EDT Monday with 5,000 pounds of supplies for the International Space Station. (SpaceX via AP)

The Dragon is carrying nearly 5,000 pounds of space station cargo and experiments, including a $26 million docking ring that must be in place for astronauts in Boeing and SpaceX crew capsules to link up to the station, as planned in the next year or two.

As for when one of these reusable rockets will actually be reused — that’s supposed to happen sometime this fall. CEO Elon Musk said the first landed Falcon 9 to fly again will happen sometime in September or October. For that first launch, SpaceX plans to use the rocket it landed in April — the first vehicle to land successfully on one of the company’s drone ships. 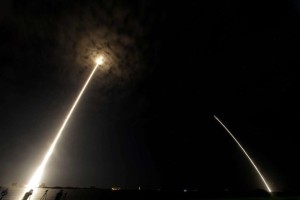 SpaceX is All Set to Raise the Bar

SpaceX has spent most of 2016 making records with all the previous rockets landing successfully on the barge. The mission hopes to make up for one last summer when SpaceX’s Falcon 9 rocket failed for the first time. A Dragon carrying $118 million worth of cargo, including the first International Docking Adaptor, or IDA, and a spacesuit that ended up in the Atlantic Ocean. This landing brings SpaceX’s total number of recovered rockets to five.

SpaceX is seeking government’s permission for two extra landing pads. The private spaceflight company says that it might attempt to land its Falcon Heavy rockets on one of its drone barges—a protocol that the SpaceX has nearly perfected in the past year. Eventually, however, SpaceX wants to land three rockets on solid ground. The extra two ports SpaceX hopes to build at Cape Canaveral’s Air Force Base, where the company already has one port, would give it the real estate to do that.

Can’t wait to see all three cores of Falcon Heavy come back for landings! First two will be almost simultaneous. https://t.co/ryMiewZM4L