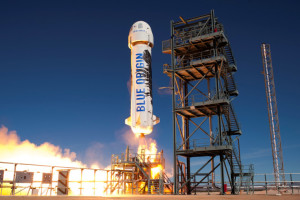 Blue Origin has successfully launched its fourth test flight of New Shepard. During the 10-minute flight the rocket and spacecraft performed as anticipated, and the New Shepard capsule made a reasonably soft landing given that one of its three parachutes intentionally failed.

The New Shepard vehicle consists of a capsule for passengers or cargo, and a reusable rocket booster. The company has successfully launched and landed this same rocket hardware three times since November 2015.

In the statement, Bezos said this Sunday’s flight would be used to test a scenario in which one of the capsule’s landing parachutes fails. 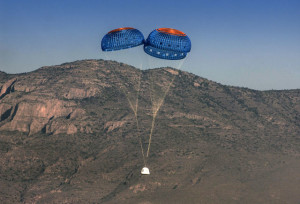 “On this flight, we’ll intentionally fail one string of parachutes on the capsule,” wrote Bezos, who is also founder and CEO of Amazon.com. “There are three strings of chutes, and two of the three should still deploy nominally and, along with our retrothrust system, safely land the capsule. It works on paper, and this test is designed to validate that. We’ll also use this flight to continue pushing the envelope on the booster.

“As always, this is a development test flight, and anything can happen,” he added.

Bezos noted the capsule is fitted underneath with retro-rockets, which fire right before the vehicle hits the ground. These help to push against the surface and slow the capsule’s fall a bit further. The spacecraft also has what is called a “crushable structure” that helps absorb some of the blow of landing.

A replay of the mission can be seen in the webcast embedded below.