Despite the fact that it is not a widely used decentralized finance (DeFi) network, the Algorand blockchain has continued to rise in value, with multiple investors flocking to buy ALGO.

Algorand has established an entire development environment for itself in a market dominated by Bitcoin and Ethereum and has been establishing significant strategic agreements in recent weeks. 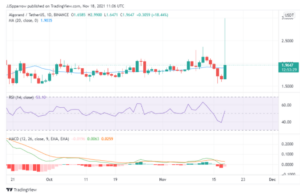 On the daily chart, the prominent Ethereum competitor is currently trading at $1.9647. Weekly gains, on the other hand, are in the red, with ALGO down 1.95 percent in the last seven days.

Algorand’s market cap has increased by 18.20 percent to $12.1 billion as a result of today’s rise. ALGO trades at $3.61 billion after a 518.54 percent spike in 24-hour trading volume, indicating that investors are eager to buy the stock.

ALGO is on a steady increase to catch up with and even surpass this benchmark, having reached a remarkable all-time high (ATH) of $3.56 on June 20, 2020.

According to Coinmarketcap, Algorand is the 20th most valuable cryptocurrency, having a market capitalization of US$11 billion. The ALGO 20-day Moving Average (MA) is currently trading below the asset’s current price, at $1.86, indicating that the DeFi asset is on a bullish run.

ALGO is in the underbought zone, as shown by the Relative Strength Index (RSI) of 52.3. As a result, now is a wonderful moment to invest in ALGO. According to a news item released on the Algorand blog on November 18, 2021, Algorand is forming a relationship with pioneers in terms of fundamentals.

The collaboration will create the world’s first NetZero climate wallet, allowing anybody to grow climate portfolios using the world’s most biodiverse natural ecosystems.

The ALGO ecosystem has a reputation for favoring a more long-term approach to blockchain development. This is excellent news, particularly for supporters of renewable energy and climate change.

Another development is that MAPay, a global healthcare technology corporation, is collaborating with the decentralized payment network to create a stablecoin that will process over $800 million in healthcare costs in Bermuda.

The relationship with ALGO, according to the corporation, will be a game-changer, bringing huge improvements to the current slow and burdensome traditional healthcare payment system.

Meanwhile, ALGO made history when it created the world’s first COVID passport based on blockchain, which is now operational in Colombia. Algorand and Koibanx collaborated on this project, which resulted in this effort.

The project’s outcome is designed to provide patients with user-friendly, dependable, and straightforward experiences, allowing for the creation of a digital certificate. The globe may now say goodbye to paper COVID certificates thanks to this breakthrough.

ALGO’s investment in environmentally friendly and health-related projects has given the network a reputation for supporting projects that promote human growth.