Andrew Yang, a former member of the Democratic Party who ran for president in a primary election, has now announced the formation of his new political party, “The Forward Party.” He later confirmed his support for the bitcoin business as a whole. 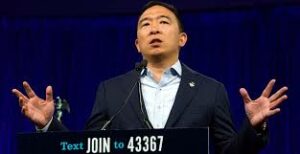 Yang announced his new party in a video monologue in a tweet from yesterday, in which he outlines what the party is all about. Jeff Booth, a well-known entrepreneur, and Bitcoin maximalist responded to Yang’s announcement a few hours later.

He made a briefcase for opposing monetary manipulation before being asked if Yang’s campaign will “promote Bitcoin and the free market.”Within minutes, Yang wrote to Booth, professing to be a lover of cryptocurrencies as well as Booth’s work.

“I’m a big supporter of Bitcoin and cryptocurrencies in general, and instead of adopting the inflation model, I’d rather see fiat prices fall as they should as things get more efficient.” Jeff, I learned a lot from you”.

He then proceeded to connect bitcoin to one of his campaign promises.” Who says UBI needs to be enacted by fiat?” he wonders. This indicates that he may be willing to use cryptocurrency to conduct government transfers.

Yang understands the difference between Bitcoin and Cryptocurrency

While the crypto community has reacted positively to Yang’s remarks, some have asked him to focus entirely on Bitcoin. Other cryptocurrencies, according to Dennis Parker, a semi-popular Bitcoin maximalist, are “a gigantic casino without fundamentals.”

Yang soon responded, saying Bitcoin is “unique in its ability to give a robust non-manipulable foundation.”This suggests that Yang currently has a good understanding of the bitcoin space. He even mentioned the industry during his Democratic Primary campaign in 2019.

He’s not the only politician who’s paying notice. A week before the Federal elections, Canadian party leader Maxime Bernier stated his support for Bitcoin. Bernier, like Yang, acknowledges Bitcoin’s potential as a store of value and inflation-fighting weapon.

According to a report published by Bank of America, the businesses backed by and based on cryptocurrencies have experienced a massive global boom, making the area “too huge to ignore.”

According to the report, around 221 million people have exchanged cryptocurrencies in the last several months, indicating that the market is still growing. Mergers and acquisitions in the crypto space increased from $940 million (about Rs. 7,025 crores) in 2020 to $4.2 billion (roughly Rs. 31,390 crores) in 2021.

Last month, Jerome Powell, the Chairman of the Federal Reserve in the United States, stated that the central bank had no plans to restrict the cryptocurrency sector. Miami, Florida, has also recently launched the MiamiCoin, its first native digital currency.