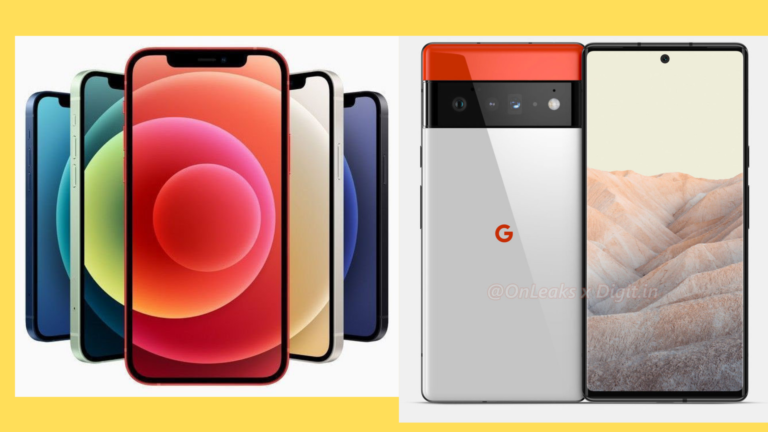 Both the iPhone 13 and the Pixel 6 are slated to be released in the coming months, potentially setting up a battle this fall between two of the most popular flagship phones. We have a pretty decent notion of how an iPhone 13 vs. Google Pixel 6 duel is shaping up thanks to a regular stream of rumors.

The majority of the information about the Pixel has already leaked, thanks to rather detailed specs leaks. The iPhone 13, on the other hand, remains shrouded in secrecy, despite industry sources claiming to know the major features and advancements. Leaker Jon Prosser disclosed facts about the Pixel 6 and Pixel 6 Pro in the most recent specs dump (or Pixel 6 XL, if you prefer).

While it appears to be a top-tier Android phone, the Google-made silicon and the promised five years of upgrades were the standout features. We’re hopeful this is correct because it would put the Pixel 6 on par with the iPhone 13 in terms of support.

In this iPhone 13 vs. Google Pixel 6 comparison, we’ll see how these two phones compare in the coming months. Both phones are expected to deliver the best potential photographic experiences on a phone. The Pixel 6 will be the flagship Android device, displaying Google’s new Android 12 vision in all of its Material You glory. However, the iPhone 13 will be at the forefront of iOS 15’s extensive list of changes. Rest assured, the battle to be the finest phone in the world will be tough.

We anticipate four iPhone 13 versions, similar to the iPhone 12: a 5.4-inch small, a 6.1-inch standard edition, a 6.1-inch Pro, and a 6.7-inch Pro Max. Apple, we believe, will continue to adopt OLED panels in order to achieve richer colors and deeper blacks. Once you’ve made the switch to OLED, there’s no going back.

The addition of a fast refresh rate on the display for the Pro models could change with the iPhone 13. High refresh rates offer faster and smoother scrolling, smoother supported games, and a slicker overall experience. The iPhone 13 Pro is expected to include an adaptive 120Hz rate, similar to the Galaxy S21 range, which we believe will make iOS 15 on the iPhone 13 feel fantastic.

Aside from software, the iPhone 13 and Pixel 6 are expected to shine in the camera department. Apple and Google have perfected the mobile photography experience, pushing the boundaries with innovative software that consistently positions their phones among the finest camera phones. We anticipate that this trend will continue with phones released in 2021.
The iPhone 13 small and iPhone 13 both appear to have two rear cameras, while the megapixel count is unknown. The phones are believed to use the same camera setup as the iPhone 12 and 12 mini, with the main camera and an ultrawide camera. The iPhone 13 Pro versions are expected to retain three cameras, with a telephoto lens joining the other two. More crucially, all four iPhone 13 models are likely to feature larger sensors and sensor-shift stabilization, which will be an upgrade over optical image stabilization (OIS).

Previously, this capability was only available on the iPhone 12 Pro Max. The ultrawide camera, which has a six-angle lens, autofocus, and an f/1.8 aperture (vs. f/2.4 on the iPhone 12 series), will most likely be the most noticeable difference. All of these should make ultrawide images on the iPhone 13 substantially better, especially on the Pro models.

The smaller Pixel 6 appears to contain two cameras: a 50MP wide-angle lens and a 12MP ultrawide lens. A third 48MP telephoto camera is expected to be added to the larger Pixel 6 Pro. Many of Pixel’s basic shooting modes will work in tandem with Google’s AI capabilities (Night Sight, astrophotography, etc.).

Design Comparison: iPhone 13 vs. Google Pixel 6
In recent months, we’ve seen renders and dummy devices purporting to show off the final designs for both the iPhone 13 and the Pixel 6. Google appears to be departing dramatically from its prior design language with the Pixel. Pixels have been sparsely attended up to this point.

The Pixels have stayed with a muted style except for certain odd colors including blue, orange, and pink. The Pixel 6 could utterly defy this trend. Not only have some renders revealed a tri-color design, but there may also be a big camera bar that spans the breadth of the phones. It’s definitely a look, though it’s polarising among Android and Pixel lovers so far. Something new and different excites us.

The iPhone 13 appears to be very similar to the iPhone 12, but with two important alterations, according to leaked renders. For starters, renderings and rumored screen protectors depict a considerably smaller notch for the Face ID camera and sensors. The earpiece appears to have been repositioned above the display, allowing the Face ID technology to be squished down. This is a refreshing variation from the infamous notch, which has become stale in recent years.

The camera array configuration on the iPhone 13 mini and iPhone 13 is another significant difference that appears to be slated for the upcoming iPhone. Rather than having the two lenses stacked vertically like the iPhone 12, both phones appear to feature lenses that are diagonally opposed. Although it isn’t a significant adjustment, it will help the iPhone 13 stand out from its predecessor.

Performance and 5G on the iPhone 13 compared. Google Pixel 6

We’re pretty sure Apple is working on a new A15 Bionic system-on-chip (SoC), which should be slightly better than the A14 Bionic used in the iPhone 12 series. Nonetheless, the A15 Bionic is likely to outperform the finest chips from Qualcomm, MediaTek, and Samsung. If you compare performance to an iPhone 12, though, it won’t be life-changing.

According to rumors, the iPhone 13 will include Qualcomm’s X60 5G modem. For the time being, the X60 will outperform the X55 in the iPhone 12 in terms of speed and aggregation.

The Pixel 6 is intriguing since there have been multiple solid speculations that Google is breaking relations with Qualcomm. It will accomplish it by working with Samsung to build its own silicon and manufacturing it using Samsung’s 5nm technology. Whitechapel is the codename for this project, and it will be released on the Pixel 6.

Whitechapel is shaping out to be a fascinating chip. Despite claims that it won’t be able to rival the Snapdragon 888, which is currently the best SoC Android phones can use, Whitechapel is said to be focused on pushing the boundaries of AI and machine learning on a phone, as well as a new security processor called Dauntless.

However, some theory is that it will be closer to the Snapdragon 870. Whitechapel might also indicate that the Pixel 6 will be supported for a significantly longer period of time. We don’t know what modem the Pixel 6 will employ just yet, but Qualcomm’s X60 looks like a safe bet.

The iPhone 13 vs. the Google Pixel 6 in terms of battery life and charging

Aside from the iPhone 12 Pro Max, the iPhone 12 series’ battery life wasn’t particularly impressive. And Google has recently failed to produce Pixels that can compete with the top phone battery life list. However, we expect that by 2021, both phone series will have changed this.

The iPhone 13’s normal and Pro models are expected to have a 3,095mAh battery, while the Pro Max is expected to have a 4,352mAh battery. Apple is rumored to be aiming to employ larger batteries in all of its products. This, together with the more efficient 5G modem, should help Apple’s newer phones last longer. However, with the possibility of power-draining 120Hz screens, those advantages may be negated. We have no reason to assume Apple will go beyond the iPhone 12’s 20W wired/15W wireless charging.

We now know the capacities of the Pixel 6 devices thanks to Prosser’s leak. The smaller phone could contain a 4,614mAh battery, while the larger phone could have a massive 5,000mAh battery. Because Google will be in charge of the majority of the hardware, these are both huge cells that should enable both Pixel 6 models to survive a long time. The Pixel 5 only supports fast-charging up to 18W, so we’re hoping Google improves it on the Pixel 6.

The software will be one of the most significant differences between the iPhone 13 and the Pixel 6. There’s the obvious iOS vs. Android distinction. However, both phones will be at the forefront of iOS 15 and Android 12’s new developments.

Basically, fans of either camp will have a fantastic year. Apple is releasing iOS 15 with a number of new features. We’ve put up a comprehensive list of the most essential iOS 15 features, but some of the highlights include a new Focus mode, a modest notification overhaul, FaceTime updates, a Safari overhaul, Maps enhancements, and much more. Apple is going to great lengths to ensure that no stone is left unturned. The Pixel 6 will ship with Android 12 pre-installed. This latest edition of Google’s mobile OS is a significant departure from previous versions.

Material You is a design language that builds on Material Design and gives Android a whole new look. The Quick Settings toggles are larger and have much more data, there’s a data protection dashboard and see what apps should use whether the permissions and when and even the lock screen looks completely different, with a large clock that pushes into the top left corner when notifications are present; as well as the lock screen looks very different, with a huge clock that moves into the top left corner when notifications are visible.

Similar to the iPhone 12 Pro, the Pro models are expected to start at $999 and go up to $1,099 for the Max. The price of the Pixel 6 is yet unknown. If we had to estimate, the smaller Pixel 6 variant would cost $699, while the larger Pro/XL model would cost $899. Last year’s Pixel 5, which was the only model available, cost $699, and we believe Google will aim to maintain that pricing for the smaller Pixel 6.