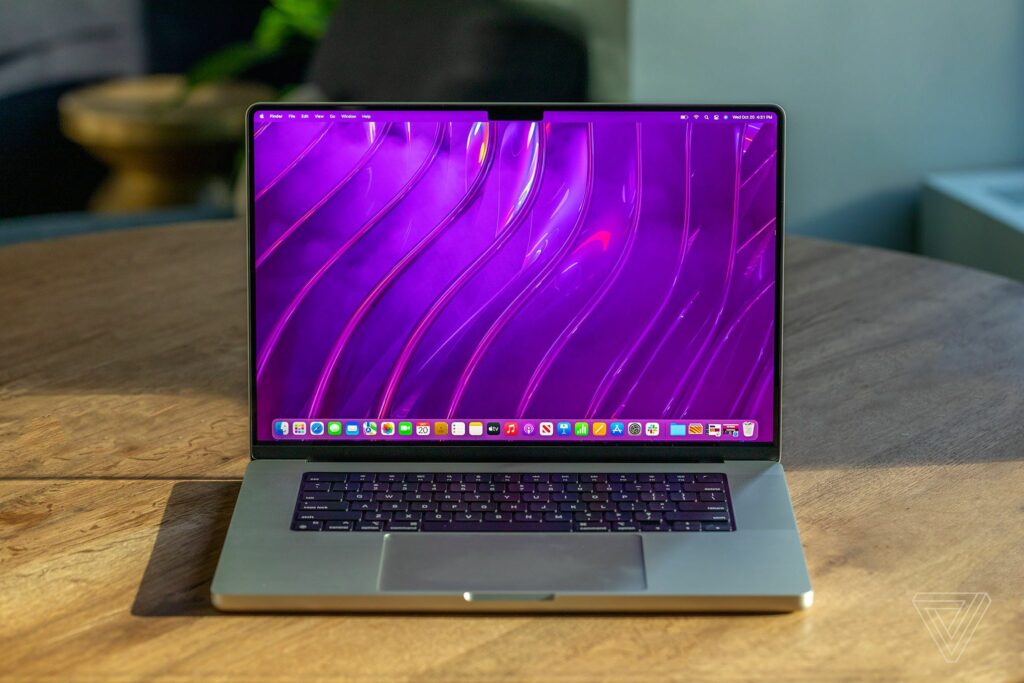 A new support document published yesterday describes a “Scale to fit below built-in camera” option in macOS that will force programs to use just the display below the notch. It’s a temporary solution for programs that don’t now operate well with Apple’s new MacBook Pros’ notch.

The camera notch cutout on Apple’s newest laptops was designed to allow for a larger edge-to-edge screen. However, as we reported yesterday, users of the new MacBook Pro models have reported that both programs and the OS have misbehaved, with app menus and status bar components becoming concealed under the camera cutout.

The scale-to-fit solution addresses this, however, it results in the enormous bezels that the notch was supposed to eliminate. On Twitter, artist @Jatodaro illustrated the scaling functionality, illustrating how clicking the option for ‘Scale to fit below built-in camera’ in an app’s Get Info window shrinks the display for all applications. If the app is closed or the box is unchecked, the full-sized display (with notch) will be restored.

Good news for notch haters! If you've got an app (or apps) with menus that collide with the notch, just Get Info on the app, and enable "Scale to fit below built-in camera".

While the app is running (even in the bg), your display is scaled.#Apple #M1Pro #M1Max #MacBookPro2021 pic.twitter.com/nlGqkFkXAH

Apple also notes in the support article that this scaling functionality will be removed after developers update their apps to properly handle the notch.

Apple’s new MacBook Pro notch is acting strangely. Early users observed differences in how Apple manages the notch throughout macOS and in specific programs, resulting in unexpected behavior such as status bar items being obscured behind the notch. These inconsistencies give the impression that Apple has forgotten, in certain sections of macOS, that the MacBook Pro has a notch.

Quinn Nelson, the proprietor of Snazzy Labs, has shared two videos on Twitter showcasing some of the early notch concerns. The primary video shows what looks to be a macOS problem. When status bar elements are enlarged, they might become obscured behind the notch, like as Apple’s battery indication.

WTF HAHAHAHA HOW IS THIS SHIPPABLE? WHAT IS THIS?! pic.twitter.com/epse3Cv3xF

Nelson shows this with iStat Menus, which can be concealed inside the notch or cause system components like the battery indicator to do so.

While Apple has provided developers with information on how to work with the notch, the creator of iStat Menus claims that the app only uses conventional status items and that Apple’s developer guide “would not fix the issue demonstrated in the video.” This does not appear to be the intended functionality, as the notch behaves differently in different programs.

Nelson also mentions how an earlier version of DaVinci Resolve avoids the notch. You can’t even slide your mouse pointer into it in applications that haven’t been updated for the notch.

Apple has blocked this area so that older programs cannot display menu items beneath the notch. However, 9to5Mac reminds out that this behavior is inconsistent throughout the rest of macOS, so if you have the Finder in focus, the pointer may become lost behind the notch.

According to MacRumors, this is standard macOS behavior, although the notch plainly lowers the amount of space for both menu items and status items. It’s a persistent problem that has given rise to tools like Bartender and Dozer to assist manage the macOS menu bar.

Even if developers adjust their usual programs to operate around the notch, it’s unclear how Apple will resolve these discrepancies. Fortunately, these issues will be quite unusual and will most likely emerge primarily in apps with a large number of menu or status items.