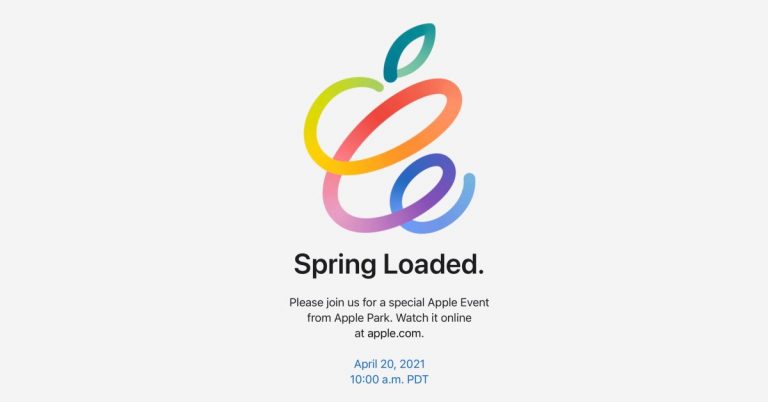 The wait is finally over! Apple has officially announced the date of its upcoming live event which is happening on the 20th of April. The company’s invite teases the tagline “Spring loaded” and honestly, the announcement was no surprise because the date of the Apple event was already announced by Siri earlier today. The internet broke with Apple’s new style of announcement made by its very immersive virtual assistant.

The new squiggly Apple Logo as (referenced by the Verge) used for the event’s invite and the “Spring Loaded” tagline hints that the company could launch a new Apple Pencil, hopefully with a new clickable button this time. However, there is a lot expected from Apple’s April event as the internet has lately been flushed with all sorts of Apple rumours and speculations.

As the artwork by Apple teased an Apple Pencil, this clearly means that we can expect two new iPad Pro variants featuring an 11-inch model and a bigger 12.9-inch model. As speculated by the market, the design of this year’s iPad will be the same as last year’s models but with a bit of a surprise. Actually, it is not even a surprise anymore as several trusted sources have reported that the bigger iPad Pro model with a 12.9-inch screen will feature all-new Mini LED displays and a faster processor with similar performance to the flagship Apple Silicon M1 chip. The iPad Pros could also have a USB Type-C port for better connectivity with accessories and other devices such as Camera gear for vloggers and video editors. As mentioned in a report by The Verge, the smaller iPad Mini would probably feature an 8.5 or 9-inch display which is larger than last year’s model.

Other devices that are expected from the upcoming Apple event include Apple’s AirTags which are supposedly Tile competitors. Apple will use the ultra-wideband technology in this one which was launched with the iPhone 11 series. There are strong speculations about this product. The Verge reports that AirTags entered into mass production last year but for some reason hasn’t been launched until now.

Furthermore, Apple is also expected to revamp their iMac designs, rumoured to be inspired by the XDR display. The company could also launch newer variants with Apple M1 chips or even an upgraded version. Other than this, on user’s demand, the iPhone maker could also re-introduce SD card slots and MagSafe on new MacBook Air and Pro devices.

Apple AirPods could also get a fresh design inspired by the AirPods Pro design with smaller stems and interchangeable buds. Anyways, let us end the rumours, speculations and expectations as the new Apple “Spring Loaded” event is just around the corner and we cannot wait to see what new announcements Apple has to make.