Dot (Dot) peaked at $55.08 on November 11, 2017, but the asset’s price has subsequently fallen. Polkadot had 294 of 297 validators (99 percent) invest 1.8–2.6 million DOT. According to a new report, Polkadot’s developer activity is among the highest in crypto, trailing only Ether. After consumers flocked to participate in para chain slot auctions, interest in the network has waned. Due to the sheer architecture’s peculiarity, some misconceptions prevent widespread adoption.

About 130 million Polkadot (DOT) were locked in Parachains

Polkadot has successfully conducted 13 para chain slot auctions, with a total of 127.8 million DOT bonded – worth $2.9 billion (at the end of Q1) and accounting for around 11% of the total supply. Furthermore, 28 further para chain slot auctions are planned through February 2023, bringing the total to 41. Although the number of active and new accounts has fallen during the same period, the expansion of parachains demonstrates the ecosystem’s consistent evolution. 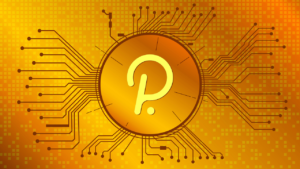 Polkadot has implemented a Proof-of-Stake consensus mechanism to decentralize the network’s validator list. Polkadot has 294 of 297 (99 percent) validators stake 1.8–2.6 million DOT in Q1 2022.

It is considered a healthy validator distribution based on the total stake – a success of decentralizing overall power as a result of the mechanism incentivizing nominators to stake alongside lower-staked validators to receive bigger rewards.

Another significant metric for analyzing the health of an ecosystem is the number of active developers. “Q1 2022 saw a 10% decline in average monthly development activity as developers prioritized activating current disclosed capabilities over building new features,” according to the poll.

As the year 2022 approached, the Polkadot network also encountered severe challenges. According to the data, customer interest in the ecosystem has declined after the parachain slot auctions in November.

To captivate users once more, the layer one protocol “needs a spark,” such as the development of “new primitive(s) utilizing the cross-chain architecture and XCM communication.” Users have also questioned the general functionality of the network’s main wallet, the Polkadot JS wallet.

Finally, the paper argued that the architecture’s uniqueness has resulted in misunderstandings and misconceptions that are impeding the network’s widespread adoption.