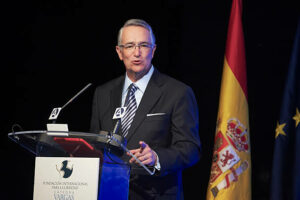 Ricardo Salinas Pliego is one of the most popular crypto enthusiasts in the world. Pliego is no common man, but the third richest man in Mexico who advocates the benefits of cryptocurrency now and then and is well known as a Bitcoin proponent. This time, Pliego again criticized U.S. dollars and gold as an investment and reiterated the importance of bitcoin investment.

This Sunday, Ricardo Salinas drew the attention of the entire crypto community towards his tweet claiming that the Bitcoin investment is anytime better than dollars or gold. In fact, the third richest man of Mexico clearly stated that Bitcoin is the “New Gold”.

This is not the first time when Pliego argued regarding the bitcoin as an investment, previously in an interview, Ricardo said that when it comes to wealth preservation. Bitcoin easily beats fiat currencies.

“Fiat is a fraud. I started my professional career in ‘81. The Peso was at 20 x 1 USD. Today, we are at 20.000 x 1. That’s all there’s to know. …if we look at Venezuela, Argentina, or Zimbabwe, the numbers loose all proportion.” @RicardoBSalinas pic.twitter.com/NFZJ3FbPPg

Recently Ricardo Salinas replied to a tweet by Michael Saylor, the CEO of MicroStrategy, who is well known for the establishment of the Bitcoin mining council which is recently formed after the tweet by the Tesla CEO saying, he had “promising talks” with the miners, and hence have had a change of heart towards the cryptocurrency. Responding to the tweet by Saylor, Pliego tweeted, “That’s totally right, Bitcoin is the new gold, but too much more portable, transport Bitcoin is so much easier than having your in pockets gold bars … and I know that I’m going to be attacked by gold lovers.”

That’s totally right, #Bitcoin is the new gold, but too much more portable, transport #Bitcoin is so much easier than having your in pockets gold bars 🤪… and i know that I’m going to be attacked by gold lovers 😜😌 https://t.co/aMMxd6OwFg

Pliego is among the top influencers who speak out loud for their interest in cryptocurrency and how they admire bitcoins. Though when a Twitter user asked Ricardo, whether Mexico will be able to adopt the bitcoin as legal tender just like El Salvador, Pliego sealed his mouth and said he has no idea about it.

El Salvador recently became the first country to adopt bitcoin as a legal tender and now many other countries are following the footsteps of Salvadoran congress and are planning to welcome the cryptocurrency. Paraguay is one such country that is making noise about the adoption of bitcoin soon.

As there is a debate around bitcoin v/s gold as an investment, there are many experts who say that bitcoin will always be inferior to gold. Peter Schiff who is known as the gold bug on Twitter, always highlights the volatility of the cryptocurrency and hence says that bitcoin can never be an alternative to gold in any circumstances.