Among the greatest power alternatives for home and outdoor activities, Bluetti has been around for a number of years. Four new goods have already been added to the company’s product line, and more are on their way. 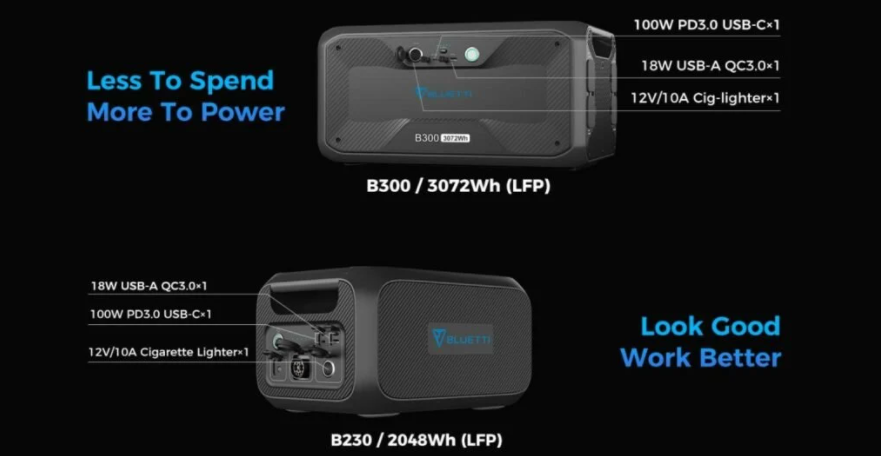 Many people have praised the performance of the popular AC200P. Bluetti has made substantial enhancements this time around, and the AC200 MAX is essentially a whole overhaul of the AC200P. The MAX can store up to two B230 or B300 battery modules, which when connected together may increase the overall capacity to an incredible 8192Wh! The cherry on top is that it can handle 900 watts of solar power, which is a 28% improvement over its predecessor.

The AC200 MAX features a specifically designed built-in 30A NEMA TT-30 outlet that caters to RV enthusiasts. The power solution also has Bluetooth connectivity and it can be operated wirelessly using the Bluetti Smartphone App, which is available for both iOS and Android. Bluetti Power Week is giving a $500 discount on the Bluetti AC200MAX and B230 as an introductory deal. 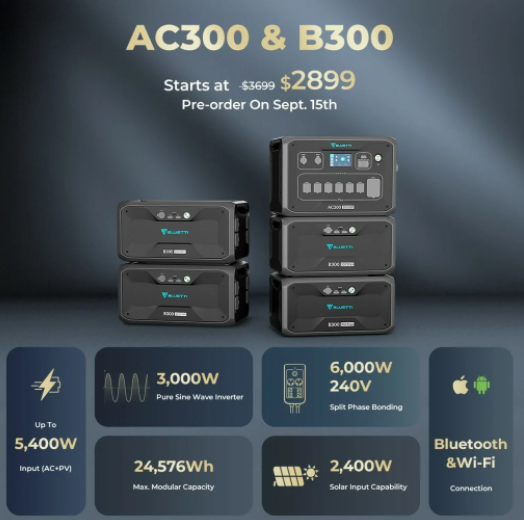 The AC300 is described by Bluetti as a raw-power monster. It’s completely modular, with the 3000-watt pure sine wave inverter housed in the main unit. Needless to say, the AC300’s power capacity is enormous. To put it another way, each AC300 will be able to offer a massive 12,228Wh of capacity when combined with four 3072Wh B300 battery modules!

To make things even more intriguing, Bluetti’s Fusion Box Pro will allow us to connect two AC300s together, bringing the whole system up to 240V and 6000W. Yes, a completely stacked system has a capacity of 24,576Wh, which is enough energy to run a home for over a week! To say the least, it’s incredible.

Now you’re probably wondering, what about solar energy? The AC300 can handle 2400W of solar power, while the fully stacked version can handle 10,400W. Bluetti is offering an early bird discount of $800 to those who sign up. 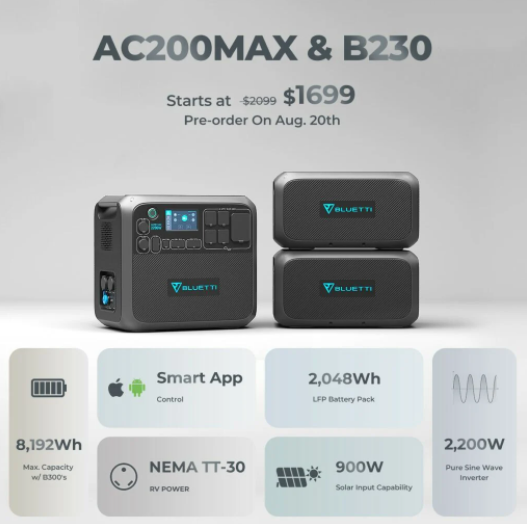 The B230 and B300, according to Bluetti, are “industry-first” advancements in modular power supplies. The B230 and B300 are unique in that they can both be charged and discharged as an independent power module and include a variety of DC outlets, including a 100W USB-C connection, a 12V/10A vehicle output, and several USB-A connectors.

Additionally, with an AC to DC converter, both battery modules can absorb 500W of AC power. Not to mention that the B300 has its own 200W (MPPT-ready) solar inlet in case your power storage runs short the next time you and your buddies go off-grid camping.

Finally, Bluetti offers a DC charging enhancer, commonly known as the DC Enhancer or Little Magic Box. The Box serves as a supplement to the Bluetti units’ DC inlets (the DC7909 port for adaptor).

The Little Magic Box’s built-in MPPT charge controller with voltage regulator circuits allows it to charge existing Bluetti goods in a number of new ways. For example, by connecting the newest Bluetti battery modules or lead-acid batteries to our new DC Enhancer, you may now improve the total capacity of older Bluetti models like the EB150 and EB240. You may also use the 12V/24V cigarette lighter port in your car to charge it.

As you may be aware, the most recent products are monsters. However, this does not negate the value of earlier generations. You may still get a fantastic price on earlier versions because Bluetti is now running a promotion. To mention a few:

So, if you’re looking for a dependable Power System, don’t forget to look at Bluetti products.