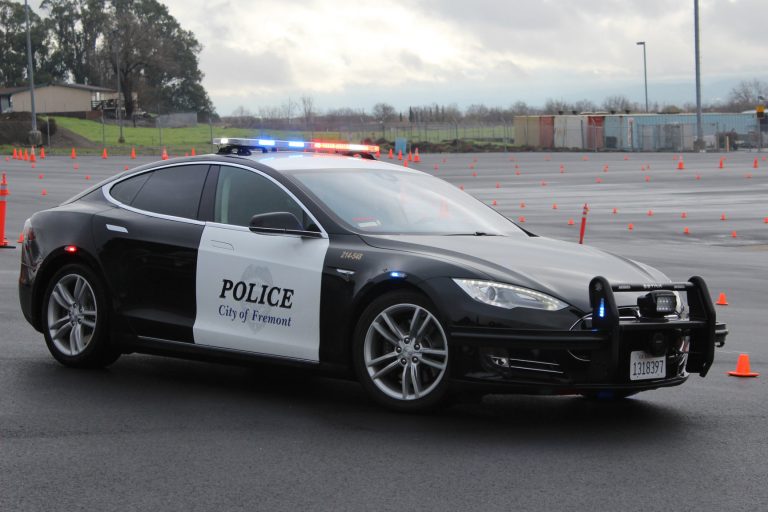 The Tesla cars supplied to California Police Department have additional features like prisoner seats, Panasonic mobile computers, and prisoner partition. These Tesla Model 3 are to replace the earlier 2005 Jeep Liberty.

In 2014, Fermont Police got into hybrid EVs and Tesla Model S cars for their officers. As time passed, in 2019 electric cars were blamed for a case going wrong when the officer driving ran out of charge for his car. However, the police notified the media that it was usual for cars to run out of gas or fuel, and is not any different with electric vehicles.

Additionally, the Tesla models provided are more efficient and have additional features. Besides the prisoner accommodation, they have an overhead light bar, push bumper, trunk lightning and headlight flashers.

Currently, the Fermont police department owns more hybrid cars than battery EVs. However, it is to change with the up-coming additional fleet.

Last year, the Model S fleet supplied to the Califonia police department, as part of pilot program was declared a success. As result posted by the Fermont Police department, the Tesla Model S exceeded their expectations.

The annual costs are reduces, however the repair costs is more than for gas Ford cars needed. Besides that, the results were much impressive, considering the extra factors offered by electric cars like speed, and easy start-stop.

Tesla Model S has proved to be beneficial and productive. It is expected that the additional Model Y fleet will bring even better results, especially with the maintenance costs.

Last year Tesla said that they expect 50% cost reduction with maintenance costs. As said by the Fermont police, “The final results from the one-year Electric Patrol Vehicle Pilot Program have been encouraging as the City of Fremont continues to look for cost-effective ways to help make Fremont more sustainable,”

PPD has added a Model 3 Tesla to its fleet. Funding made possible through a grant from El Dorado County Air Quality Management.https://t.co/05NY8DHXzw@EDCAQMD pic.twitter.com/asnsBfEyw0

Tesla Model 3 fleet is moving further to the zero-emission goals. As the grant is given by El Dorado COunty Air Quality Management, the price is reduced under $36,800, while the full cost is $40,000.

The number of cars are not announced, just that the Tesla cars are to replace the previous jeeps. Fermont police is the first police department to use Tesla cars. Besides what the data show, the cars are known to be productive, and efficient once the driver gets used to it.