Cathie Wood, the founder and CEO of Ark Invest, stated at the SALT conference organized by hedge fund SkyBridge Capital  that she expects Bitcoin will reach “over $500,000.”

“If we are correct, and firms continue to diversify their capital into something like Bitcoin, and institutional investors begin devoting 5% of their funds to [Bitcoin] — it could also be for other cryptos — we believe the price will be tenfold higher than it is now. According to a video released on Blockworks’ Twitter account, Wood said, “Instead of $45,000, it will rise above $500,000.” 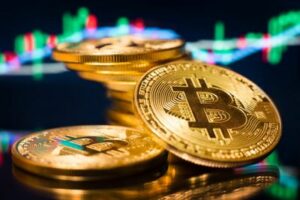 Wood also addressed the regulatory environment surrounding cryptos, stating that “no regulator wanted to be accountable for blocking the next big technology innovation from occurring in the United States.”

She continued, “And that has been true.” Wood also commended chairman Gary Gensler, expressing her delight that “he understands crypto, and understands the virtues of Bitcoin, and, in particular, he is a regulator, and he is a rigorous regulator.”

“What Coinbase did, and I was surprised when I saw Wells notice, are you kidding me, they haven’t even released the product, like what is this?” And I believe that the Wells notice is a signal from regulators that “we need to talk about this,” since things are moving so quickly. And I believe we will include courts in the system,” Wood said.

Other well-known figures are also enthusiastic about Bitcoin. In a tweet, MicroStrategy CEO Michael Saylor confirmed about increasing its holdings by 50,50 BTC

According to a Securities and Exchange Commission filing, the corporation also announced that it purchased roughly 8,957 bitcoins for $419.9 million in cash during the third quarter of its fiscal year to date, which ran from July 1, 2021, to September 12, 2021.

Wood believes the prospects of a bitcoin exchange-traded fund being approved in the United States this year have improved as a result of the recent price decline. “The odds are rising up now that we’ve had this correction,” she remarked. At press time on Wednesday, bitcoin was trading at around $40,753, a considerable drop from the cryptocurrency’s all-time high of $64,829.14 set in April.

Wood recently joined the board of directors of Amun Holdings, the parent company of 21Shares, a Swiss-based corporation that provides exchange-traded shares that give investors simple access to bitcoin.